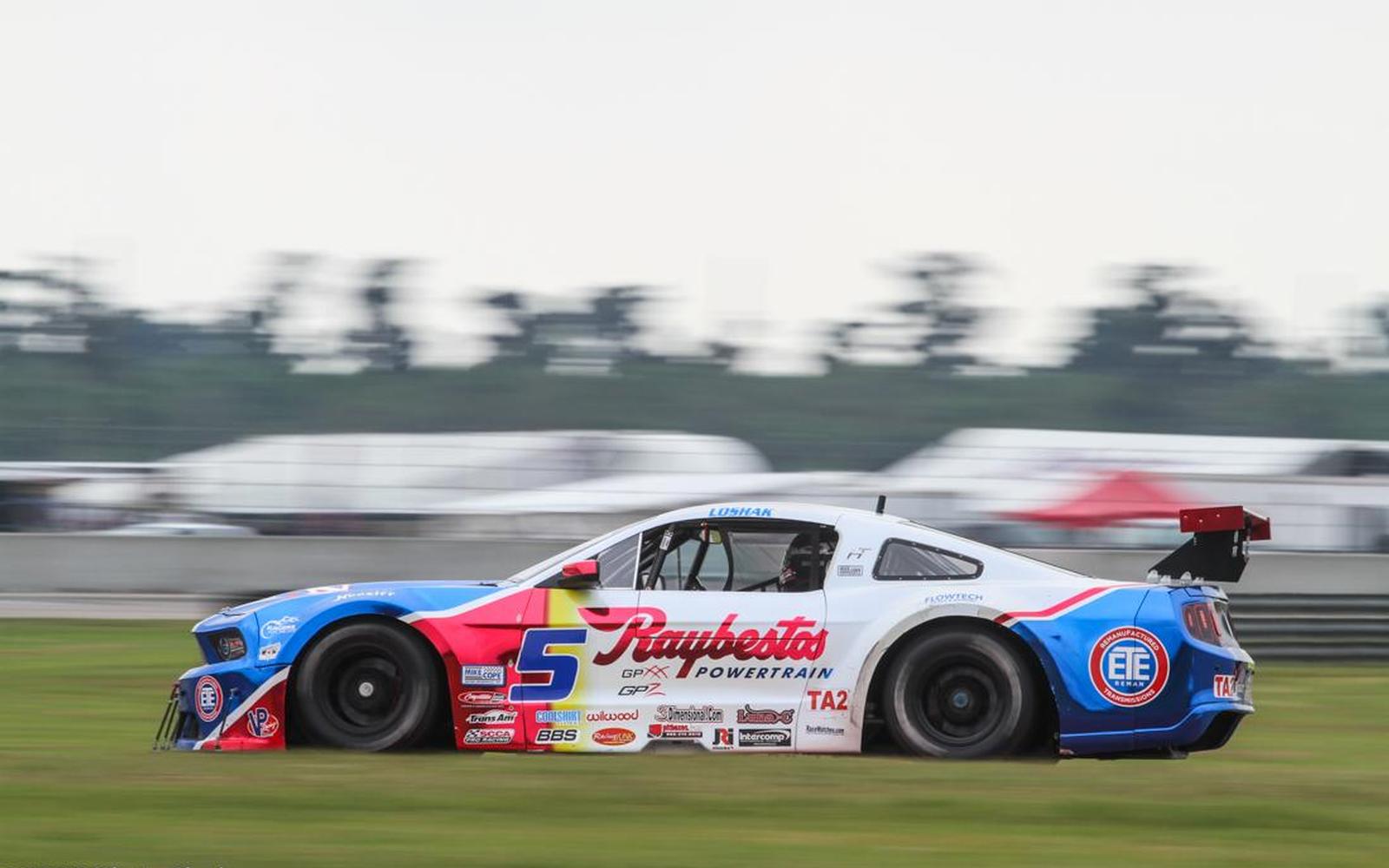 CLEARWATER, Fla. [October 15, 2015] – Mike Cope Racing Enterprises (MCRE) joined the Trans Am Series for its debut race on the 2.75 mile, 16 turn road course at NOLA Motorsports Course for Round 10 of the 2015 Trans Am Championship in one of the more challenging races of the 2015 season. The weekend saw MCRE learn and adapt to the track, the high traffic, and its ensuing demands, ultimately securing fifth and sixth place finishes for “Arrive and Drive” members Lawrence Loshak and Tony Buffomante.

“NOLA is one of the few tracks on the Series schedule we haven’t visited before,” said Mike Cope, Owner of MCRE. “The first thing you notice is just how difficult it is to pass on the course; you could have multiple seconds on a driver and it would still take you three, four turns to get by them. When you add in a 39-car, multiclass field… well things get a little hairy. Unfortunately, we didn’t qualify as well as we would have liked, setting our guys up with a pretty tough challenge—but it was one that they responded to like the talented professionals they are. Don’t get me wrong, we’re still very happy with the results, but we always strive for improvement—it’s how we believe in doings things and what our drivers deserve.”

Buffomante, in an MCRE built Ford Mustang, hot off a third place finish at Virginia International Raceway seemed posed to carry that momentum into the NOLA race but unfortunately had a cylinder misfiring throughout qualifying—still, the road racing veteran managed to qualify ninth in the 19-car field.

“It was disappointing to see, as we really felt that with Tony and that car we had a solid shot at the pole” said Cope. “Still, we got everything sorted out by the time the second practice rolled around and then he (Tony) was within a couple tenths of Shane Lewis (TA2 polesitter). Tony did a great job managing the race and working his way up through the field and the multiclass traffic. Again, it was unfortunate to see the race end under yellow; and if there had been a restart, Tony, and Lawrence for that matter, could have challenged even higher on the final laps.”

Lawrence Loshak, a recent addition to the MCRE team in an MCRE prepped Ford Mustang, was solid throughout the weekend as the MCRE team continues to learn and refine his existing chassis and car.

“Ultimately, we’ll be seeing Lawrence in one of our cars, but to finish out the season we’re entirely focused on maximizing the potential of his current ride,” said Cope. “We feel that the team made a lot of headway on determining his setup needs and getting every last bit of speed out of his platform. We’re happy with the fifth place finish; but, as always, we’re aiming for bigger things in the future—and we know Lawrence is too.”

Keith Procuik, in an MCRE prepped Chevrolet Camaro, fell victim to a rare mechanical failure with a broken rear end, ending his race with 24 laps to go—only the second mechanical failure for an MCRE “Arrive and Drive” member on the year.

“Keith was having one of his best weekends of the year,” said Cope. “He qualified well, 11th out of 19 cars, and was right there with Tony and Lawrence, running well and taking the race as it came to him. Unfortunately the unexpected happened, but he was able to quickly pull off in a safe location and bring the car back in great shape. We’ll have it ready for him for next round at COTA.”

George Lutich, driving an MCRE built and prepped Ford Mustang, made his second appearance of the year as he continues to learn both Trans Am and the TA2 platform on the fly.

“George qualified at the back of the field but was able to navigate through most of the race and bring home a 13th place finish, not bad for his second appearance” said Cope. “Everything is very new to him, these cars, this series, these tracks, the competition—it’s a big undertaking to jump right into. George will join us for a limited season next year, about three fourths of the schedule with Travis Cope filling in the rest.”

Dillon Machavern, in an MCRE built Riggins Engineering prepared Ford Mustang, seemed ready to challenge for the podium as well, but he also saw his attempts undone by mechanical issues, losing power steering and suffering a broken belt as well.

“As always, Dillon was in podium contention but saw his race cut short only 14 laps in,” said Cope. “Throughout the season he’s showcased these cars, and did so again this weekend—qualifying fourth and running in the top five until the power steering went out on him. He’s a competitor, a great driver and always a podium threat. I’m sure he’ll be eager to set things straight at COTA.”

“In the end we had a solid showing on a very difficult track to move up ,” said Cope. “We’re going to continue to work on improving our qualifying times and getting these cars dialed in so our drivers can go out and do what they do. All of our guys are very good at moving through the field, racing in traffic and in close quarters—we’re going to do everything we can to move them further up the grid and put them in position to finish these final two rounds with podium placements.”

In addition to preparing for Round 11 of the 2015 Trans Am Championship at Circuit of the Americas, MCRE is now working on making plans for the 2016 Trans Am Championship. Parties interested in TA2 “Arrive and Drive” opportunities or purchasing MCRE built TA2 cars should contact MRCE directly at 352-585-2810 or email Mike Cope directly at Mike@mikecoperacecars.com.

Heading into Round 11 of the 2015 Trans Am Championship, MCRE built cars and team members control four of the top ten positions in the Chase for the Trigon Trophy Championship Standings and six of the top 15.