Gallaugher ran an ex-Tony Buffomante Ford Mustang on the West Coast, and the No. 16 Mike Cope Racing Mustang at Circuit of The Americas and in the TA National races. (Watch Gallaugher's full CoTA race)

“[Racing double duty] wasn’t my intention at the start of the season, but because of COVID, I had more time and more desire to try to distract myself from everything that was going on in the world,” Gallaugher explained. “I ended up having just enough time to do both.”

The driver from Bellvue, Washington, captured the championship in his first season of Trans Am West competition, edging out Michele Abbate by only three points by virtue of winning what proved to be the season finale at Circuit of The Americas.

“Winning the championship was super cool,” said Gallaugher. “I’m surprised and honored that I was able to do it.”

Ironically, Gallaugher planned to run for National points at CoTA. Although he was third in the West championship entering the Texas combined event, Trans Am registrar Kelly Huxtable pointed out that he was very close to point leaders Abbate and Tim Lynn, so he changed his mind.

“The championship was close,” Gallaugher said. “Too bad we didn’t get to run Laguna and have another crack at each other. Actually, I hadn’t decided to run West Coast at COTA until Kelly pointed out that I should think about it at registration. I was one point behind Michele and I forget how far behind Tim Lynn. Then I pulled up the points, and since we had COTA and Laguna left, maybe I could get lucky and win the West Coast. It worked out.”

Gallaugher enjoyed a back-and-forth victory in the Texas event. 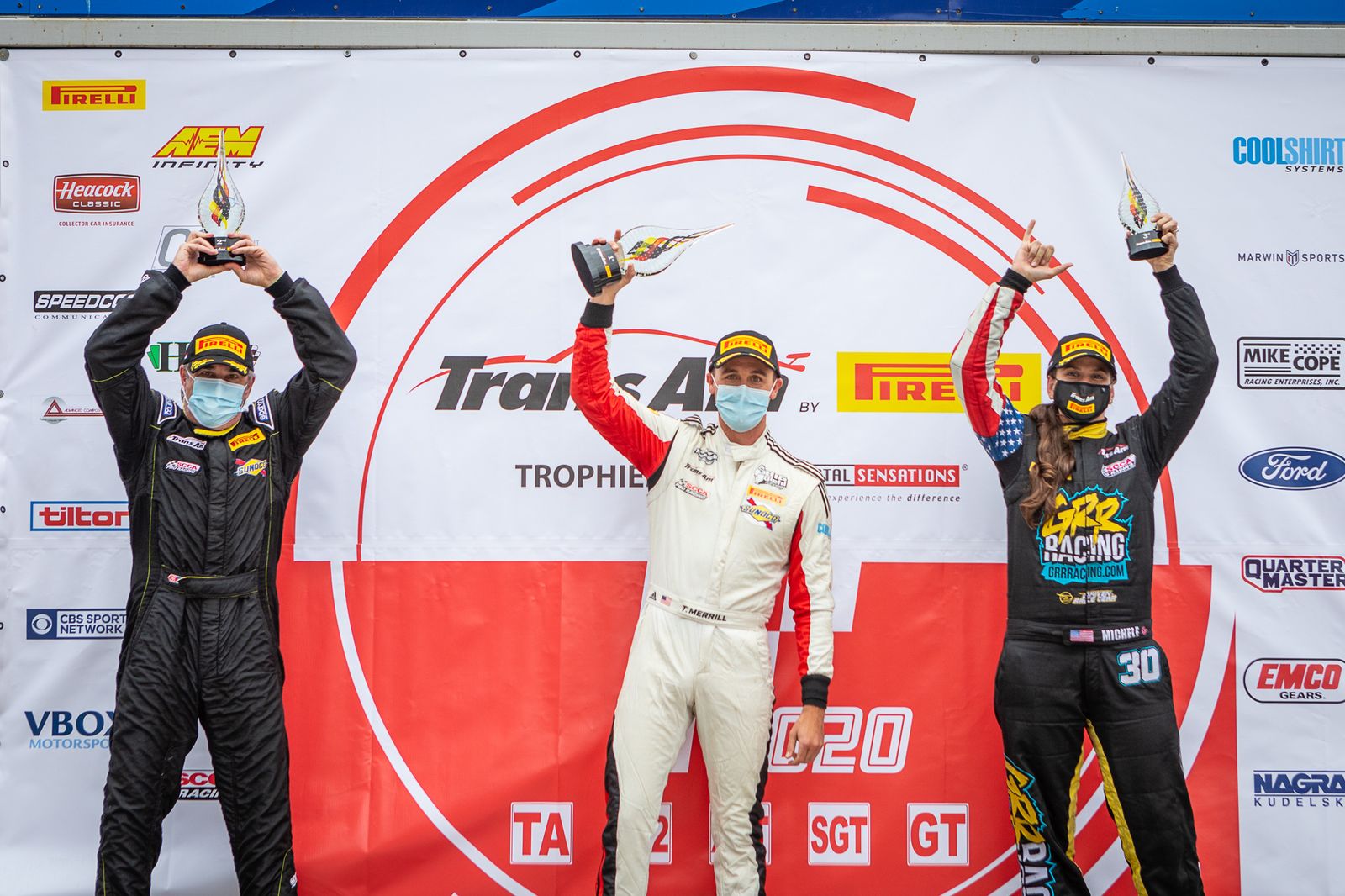 “There ended up being a number of yellows, so we kept getting collected back up and we were always tight.”

CoTA also played a major role in Gallaugher’s decision to compete in Trans Am. A 10-year veteran of club racing, Gallaugher was competing with the SVRA at the Austin complex when he decided to spectate for the pro race.

“I watched Trans Am as a kid, and I always enjoyed the Camaros, the Mustangs and the Javelins – I enjoyed that type of muscle car,” Gallaugher said. “In 2018, I was running with SVRA at COTA, and I was killing some time watching the TA2® race up in the grandstands. It was the first time I saw Trans Am in person, and I thought it was cool. After the race, I walked over to the paddock and talked to a few people, and I ended up running a car with Mike Cope for a couple of times last year. Then, I ended up buying one for this season!”

In National TA2®, Gallaugher was credited with running in seven of the nine rounds (he ran for TA2® West points at COTA), running the No. 16 Madison Development Group Ford Mustang.

Gallaugher competed in all five rounds of West competition. CoTA proved to be his first victory. After finishing behind Abbate in the opening two rounds, Gallaugher edged her by one position in the three remaining events. He finished second in the Saturday race of the second Sonoma event, before finishing fourth in the Sunday finale. Abbate finished second at CoTA. A showdown at the scheduled Laguna Seca finale failed to materialize when the event was cancelled due to the pandemic.

“I had a great year in Trans Am and winning the West Coast Championship is super special to me,” Gallaugher said. “I was able to compete in 12 races at nine different tracks, five of which I hadn’t run at previously. I really appreciate all the effort from everyone at Trans Am for being able to juggle schedules around so that we had the opportunity to race as much as we did this year. I am thankful for all the hard work that everyone at both Mike Cope Racing and J & L Fabricating put in this year on car prep. Thanks to them, I didn’t have one DNF from mechanical failure. I’d also like to thank Michael Self and Thomas Merrill for their coaching and guidance. They both played a huge role in getting me more comfortable in TA2® and facing the challenges that running so many new tracks presented.”

How would the championship finished if the race at Laguna Seca was held?

“Well, we’ll never know!” Gallaugher said. “But Laguna is my favorite track, and it’s the track where I probably have more laps than anywhere else. I’d like to think I would have finished well there.”

Gallaugher and the rest of the TA2® field will be highlighted in the CBS Sports Network three-part Trans Am Year in Review special this weekend on its new date and time: December 19 at 7:00 p.m. Eastern.