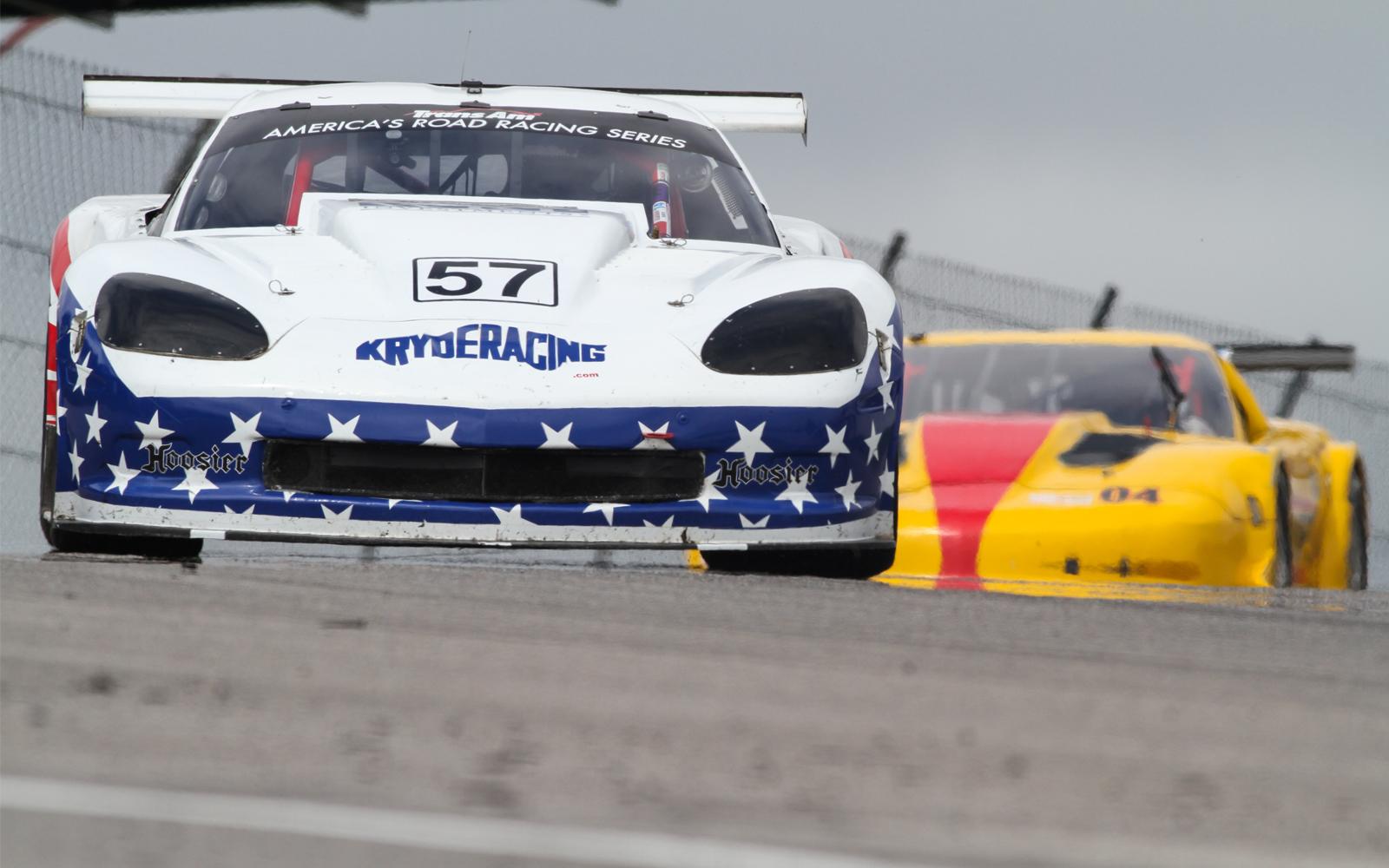 The Trans Am Series is set to return to New Jersey Motorsports Park on Sunday June 1, for the RacingJunk.com 100, Round 5 of the 2014 Trans Am Championship and part of the Great Railing Weekend of Thunder.

The Series has only raced at New Jersey Motorsports Park twice before, in 2012 , a weekend that saw Amy Ruman and Pete Halsmer climb to the top of their respective podiums and in 2010.

Now, in 2014, Trans Am returns as the Series approaches the midway point in the year; and while it may be premature to say that championship races are beginning to take shape, every point is valuable and, in some cases, leads are beginning to develop.

Trans Am will feature all three classes on the Thunderbolt track throughout the weekend, including the TA class—which now finds itself with three drivers within eight points of each other atop the point standings.

Doug Peterson, defending TA Champion and driver of the No. 87 3Dimensional.com Chevrolet Corvette, still leads the way with 103 points—but only just. A disappointing outing at Canadian Tire Motorsport Park (CTMP) saw Peterson exit the race early due to mechanical failure, opening a window of opportunity for challengers Amy Ruman and Simon Gregg, both of whom capitalized on Peterson’s early exit.

Now all three drivers, Peterson, Gregg and Ruman, will put it all on the line once again at NJMP, each trying to get a jump on the competition in the standings and a touch of consistency. None of the three have finished on the podium in consecutive races so far this year.

Ruman, in particular, will hope history repeats itself, as it would see her remain the defending TA victor at New Jersey Motorsports Park.

In TA2 defending Champion Cameron Lawrence, in the No. 1 Trick Titanium Chevrolet Camaro, still leads the way with 123 points, a solid 20 point lead on current runner-up and Trans Am rookie, Ron Keith. Lawrence started the race at CTMP in third position on his way to putting on a vintage performance, coming from behind in the same meticulous fashion that helped propel him forward in the first half of the 2013 Season, on his way to the Championship.

Lawrence will put his skills to the test at NJMP along with Adam Andretti and Kevin Poitras, two other Trans Am rookies vying for position atop the standings. Andretti has seen his No. 44 ECC Motorsports Chevrolet Camaro atop the podium once so far this year, with a second and third place finish to his name. Likewise, Kevin Poitras, teammate of Ron Keith and driver of the No. 73 Mike Cope Racing Chevrolet Camaro, is well positioned for the second half of the season, only one point behind Andretti and hot off a second place finish at CTMP.

Finally, Trans Am will also have its production class, TA3, on display with two different groups participating. In the American Muscle Group, Defending Champion Chuck Cassaro, in the No. 76 StackData/Aeromotive/Metallica Ford Mustang, will look to build on his slight points lead against the likes of Rob Bodle, Ernie Francis, Jr. and Joseph Rosenheck. Likewise, in the International Group, current points leader Russ Snow, driving the No. 20 Carbotech Chevrolet Corvette, will be pitted against Joe Aquliante, Preston Calvert and Jason Berkeley.

Trans Am will first take to the Thunderbolt track at New Jersey Motorsports Park at 9:10 a.m. EDT on Saturday, May 31, for an official practice, with an encore at 3:05 in the afternoon. On Sunday, June 1, Trans Am will hold an early qualifying session, commencing at 8:35 a.m. to determine the order for the 101.25 mile, 45 lap, Trans Am Race, Round 5 of the 2014 Trans Am Championship, taking place at 4:00 p.m. that afternoon.

Fans are encouraged to participate in the open Driver’s autograph session at 12:35 pm on Saturday and to explore the Trans Am paddock throughout the weekend.

Keep up with all the action over the course of the weekend at www.gotranam.com, www.facebook.com/gotransam and on Twitter at @gotransam.

About Trans Am:
The Trans Am Series dates back to 1966. Throughout the years, some of the greatest names in motorsports have participated in the Trans Am Series. Past Trans Am Champions include Paul Gentilozzi, Tommy Kendall, Mark Donohue, Scott Pruett, Wally Dallenback Jr, George Follmer, Scott Sharp, Bob Tullius, Tony Ave, Bob Stretch, Simon Gregg, Doug Peterson, Cameron Lawrence and Chuck Cassaro.

The iconic Trans Am Series – America’s Road Racing Series–is operated by the Trans Am Race Company, LLC. Through a five-year agreement, the Trans Am Race Company manages the marketing rights to the series and is responsible for Trans Am Series public relations and promotions. SCCA Pro Racing sanctions Trans Am events and provides event operations services to the series. To learn more about Trans Am visit www.gotransam.com, www.facebook.com or @gotransam.