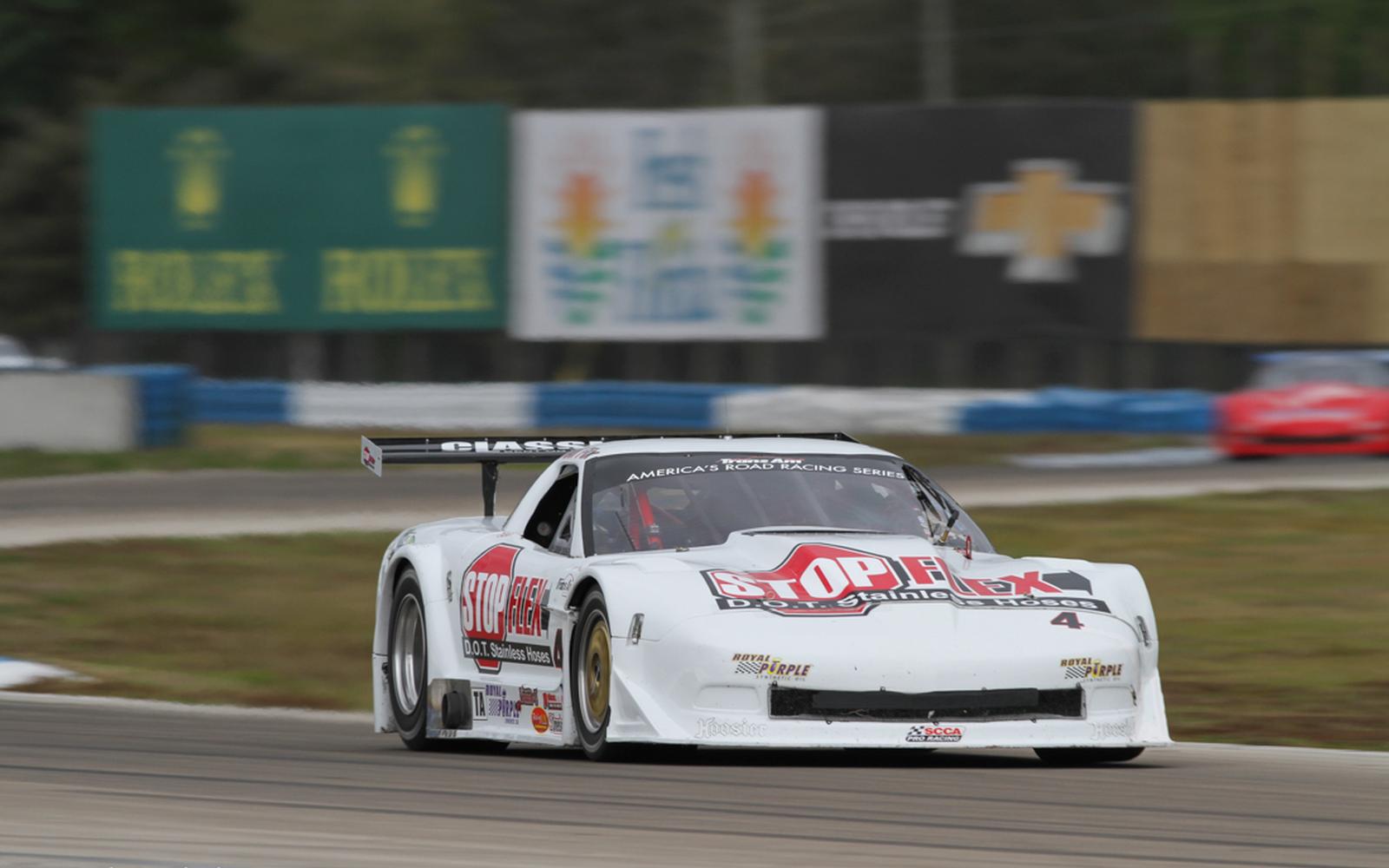 (Team Release) Sebring, FL (March 3, 2015)- Paul Fix brought the #4 ClassicTube/Stopflex/CarCoach/Royal Purple/Well-Worth Products Chevrolet Corvette to Sebring International Raceway in anticipation of leaving Winter behind and getting the 2015 Trans Am season underway. As Fix and the other 73 competitors would realize, Mother Nature had other plans. Constant rain and changing track conditions played a role in the weekend. For Fix though, the net result was a solid third place finish in what promises to be an exciting season of racing.

“I had great anticipation for Sebring starting off the season,” said Fix. “Coming to Florida was going to be a great relief by leaving the Buffalo snow behind. But the Florida weather certainly played games with us. “
Rain showers dominated the weather scene and what track time Fix and the #4 Corvette did see during practice was vital in preparing for the 100 mile run to the checkered flag. With ever changing conditions, car setup was pivotal. It seemed Fix was part driver part meteorologist.

“It seemed like we were constantly watching the weather radar and being surprised here and there by showers during the day of testing, practice and qualifying,” said Fix.

Heading into Sunday’s 27 lap feature race, sun and a dry track greeted the grid. Fix who qualified fourth, started from the second row with a game plan to get to the front.

“It was with great relief that Sunday's race was dry. But that presented other issues as, we had not gotten as many practice laps as we needed to sort the car fully, that resulted in a fourth place qualifying,” offered Fix.

“Tony Ave and I put a few subtle set up changes in the #4 StopFlex /CarCoach Corvette before the race knowing that the car would get better as the race went on,” said Fix.

From the onset of the green flag, Fix maintained pace with the lead group, waiting for the opportunity to advance. By lap 12 Fix had moved into third spot, later up the order to second place.

“At the start hanging onto my position and running with the leaders was really the only goal and patiently waiting for a time to strike later in the race. With such a full field I anticipated a number of yellow flag laps and that was the case,” said Fix.

“While fighting my way into second place and closing in on the leader I had a mechanical issue with the transmission losing second gear which was costly in a number of corners. At that point I had to change my driving style and held on to third at the checkered flag. All in all it turned out to be a great weekend. I’m content with having a podium finish and look forward to Homestead,” Fix stated.

The Tony Ave Racing crew will mend the broken gearbox and prepare the #4 Corvette for April’s visit to Homestead-Miami Speedway, the next event on the 2015 Trans Am series schedule. With a schedule of twelve events, the season has just begun.
The Foametix Trans Am 100 at Sebring International Raceway will air tape delay on CBS Sports Network March 17, 2015 at 8PM ET.

About Paul Fix: Paul Fix is a professional racecar driver based in New York, he has been competing in the SCCA Pro Trans-Am Series since 2000, started racing in 1992. Fix was several wins, podium finishes and championships in his career. www.paulfix.com

Sponsors: StopFlex® is a brand under the Classic Tube® companies; StopFlex® DOT Stainless Brakes Hoses incorporate a special 4 layer design for superior strength and virtually no volumetric expansion. It starts with a Teflon PTFE core (liner), which is wrapped first in a Kevlar braid, followed by an elastomer barrier and then it's strengthened further by the outer stainless steel braid. STOPFLEX® hoses feature a final topcoating of clear vinyl for a great look and easy clean up. www.stopflex.com

Classic Tube is a manufacturer of preformed tubing products for the Automotive OE, Aftermarket and Restoration markets. In addition to the Fleet, Heavy Equipment, Marine, Mining and Aerospace Industries. Classic Tube also manufactures a complete line of replacement brake, fuel, transmission and carburetor tubing applications for Cars and Trucks both Domestic and Foreign, from the 1930's to present. www.classictube.com

Car Coach®, is your go-to source for car care tips and automotive news. Car expert Lauren Fix, the Car Coach is dedicated to educating drivers about vehicle maintenance and repair as well as providing consumers with the latest car reviews, technology reviews, driving tips and auto industry trends. CarCoach.com covers all segments of the automotive and aftermarket industry, including breaking news stories, recalls, government regulations, automotive shows and events, and commentary about the future and direction of the automotive industry. Visit CarCoach.com today!

Well·Worth® is a premier “one source” performance chemical company that has been supplying innovative products and services to professionals since 1997. Over the years, Well·Worth® has become recognized as more than just a chemical supplier, but also as a partner and reference for our customers. We have one of the most extensive chemical lines in the USA and are proud that we continue to be admired for our innovative solutions on today’s fuel problems, especially diesel and ethanol. www.wellworthproducts.com