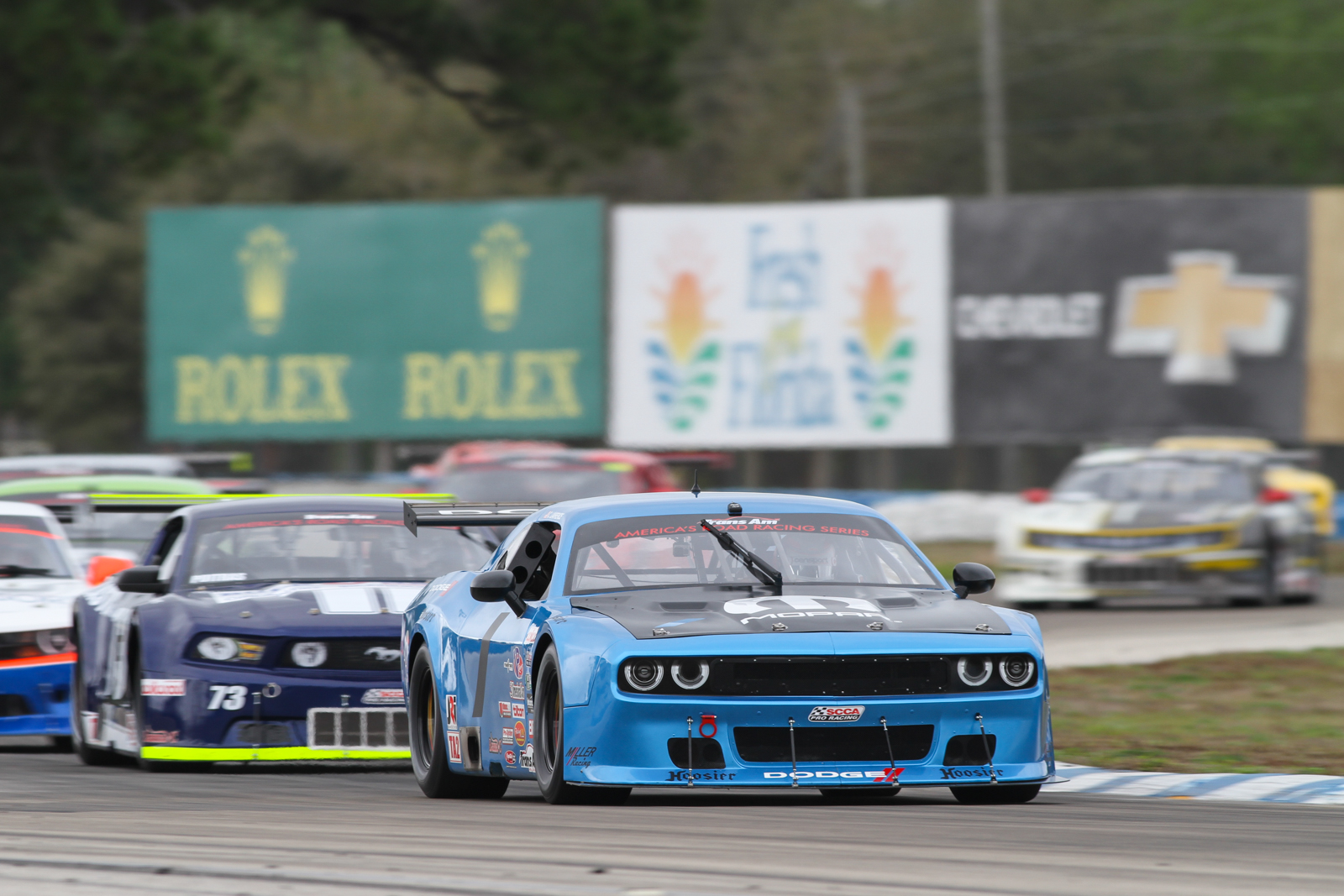 -PROVISIONAL- SEBRING, Fla. (February 28, 2015) – After the dust settled on qualifying for the FOAMETIX Trans Am 100 at Sebring International, it was Amy Ruman who secured pole position at the front of tomorrow’s 73-car Trans Am grid and the 21-car TA class field. Joining Ruman atop their respective classes are Cameron Lawrence in TA2, Lee Saunders in TA3 International, and Ernie Francis, Jr., in TA3 American Muscle.

“We’re excited to start the season off on pole,” said Ruman. “The guys have been working hard all year getting the car ready, and the McNichols 23 was fast today! I’m really excited to be on pole. My dad (Bob Ruman) and the guys made the car easy for me to drive today, and luckily the weather cooperated and gave us a dry session. We’ve got a huge field and a great showing in our class; I think the race is going to be very interesting and very busy—but my goal is to stay out front and finish out front.”

In TA2, two-time defending Champion Cameron Lawrence set the pace from behind the wheel of the No. 1 MOPAR Dodge Challenger with a time of 2:10.565, breaking his own track record of 2:10.711. Lawrence’s time saw him rise to the top of the massive 33-car TA2 field, the first step in a long road to defending the TA2 Championship.

“It’s nice to start off at a home track,” said Lawrence. “I have a lot of time here at Sebring. We were testing here last week, so it’s very fresh in my mind. Geographically, it’s close to home, and I’ve got plenty of time here. It’s an advantage given the lack of dry track time we’ve had this week.”

“When you look at the TA2 field now, there are at least ten cars that should have a shot at winning the race, depending on what happens out there. Every year we keep saying its going to be more work to stay on top, and this year is definitely the case—particularly as the season goes on and everyone starts figuring these cars out. We know we have a target on our backs in the championship. We’re just going to keep doing, try not to overthink things—if we’re fast we know we stand a chance.”

Tony Buffomante, driving the No. 34 BestLine Superior Lubricants Ford Mustang, will start in second position within the TA2 class after logging a time of 2:11.961; while 2014 Rookie of the Year and Runner-Up Adam Andretti, in the No. 44 Engineered Components Company Chevrolet Camaro, will begin the race in third position after turning a lap at 2:11.996.

Lee Saunders, driver of the No. 84 Landsearch LLC Dodge Viper, set the pace for TA3 and its International subgroup with a time of 2:15.196. In 2014, Saunders was victorious at Sebring, and while he led the International Group that year he did not start the race on pole. Still, Saunders won his group here in 2014, a result he will look to replicate come race day.

“This is my home track, so that experience helps a lot,” said Saunders. “There was a ton of traffic out there, and there will be even more obviously in the race. We’re really happy that the car performed like it did, and we’re ready for the race. At the same time, I want to dedicate this pole to my dad. We had to put him in a nursing home this week, usually he’d be here supporting us and cheering us on, so this one is for him.”

Ernie Francis, Jr., defending TA3 American Muscle Champion and driver of the No. 9 Breathless Racing Chevrolet Camaro, led all members of the TA3 American Muscle group with a time of 2:16.552, starting the season strong in a year-long effort to defend his title.

“We came out here with a completely different car,” said Francis. “We change up a lot over the offseason, and it’s proving to be really competitive out there. I’m really liking how it feels, and hopefully we can maintain that going forward. As we go about defending this Championship we’re aiming for consistency—good strong finishes every weekend and we’ll have the points to contend.”

The 73-car Trans Am field will take to the track at 2:45 pm ET tomorrow, as the FOAMETIX Trans Am 100 commences the 2015 Trans Am Championship and drivers strive for the first Trans Am hardware of the year. The race will run 100.98 miles and 27 laps around the road course at Sebring International Raceway.

Fans may keep up with the action throughout the weekend with Live Timing and Scoring at http://gotransam.com/live-timing, on Twitter at @gotransam and at www.facebook.com/gotransam.

FOAMETIX® proudly traces its roots back to the early 1960’s when a small, family owned polyurethane company realized the increasing need for more advanced, environmentally friendly urethane foam technologies. Throughout the years, this same company revolutionized the polyurethane industry with the development of LINE-X®, the worldwide leader in spray-on truck bed liners, and PAXCON®, one of very few blast mitigation products tested and approved by the US Military. For more information please visit www.foametix.com.

About The Trans Am Series:

The Trans Am Series, America’s Road Racing Series, began igniting the passion of motorsports fans across the world in 1966 and has been home to some of the greatest names in road racing. Today, Trans Am continues to honor its legacy, while challenging the status quo in racing, through meaningful racing platforms and a driver-oriented focus. The Trans Am Series is operated by The Trans Am Race Company, LLC (TARC), through a five-year agreement in which TARC oversees the management and marketing of the Trans Am Series. SCCA Pro Racing sanctions Trans Am events and provides operations services to the Series.