Slide up to the sofa: It’s Time for Trans Am Binge Watching

You say you can’t get enough of America’s Road Racing Series? You’re in luck as the rest of July unfolds.

The growing popularity of the series has prompted CBS Sports Network to add several air dates to its schedule with a virtual ‘Trans Am Binge Watching Extravaganza’ occurring Saturday, July 25. The network will devote 16 hours of its schedule on that day to re-airs of Trans Am events conducted at Sebring, Fla.; Road Atlanta; Lime Rock, Ct.; and Brainerd, Minn.

Slide up to your most comfortable sofa with your favorite beverage and snack and settle in beginning at midnight ET on the 25th for six hours of viewing. Take a short break and the Trans Am returns from noon ET to 7 p.m. After a couple hours away, the Trans Am viewing binge starts again at 9 p.m. and concludes at midnight.

“CBS Sports Network has evolved into a great partner for the Trans Am series,” said Trans Am Race Company president, John Clagett. “The addition of these airs dates demonstrates CBS Sports Network’s confidence in the popularity of our race series. We’re grateful to the network for its growing devotion to us and our style of racing.”

When Clagett completed the 2015 television deal with CBS Sports Network for this season’s television package, he was pleased the network would show an initial airing and a replay for each show. It allowed for six programs and a total of 12 broadcast hours. With the continuing success and growth of the series, as well as increased sponsorship participation, the formal arrangement with CBS has expanded to 10 programs and 20 hours of coverage.

“CBS came to us and said, based on the popularity of our shows, they are giving us more hours of coverage,” Clagett said. “It appears that, on average, each of our programs will now receive somewhere around six hours of broadcast time. We couldn’t be happier with this development.”

The Trans Am Series’ next debut comes from Brainerd, Minn. CBS Sports Network coverage of the race first airs at noon ET on July 25. 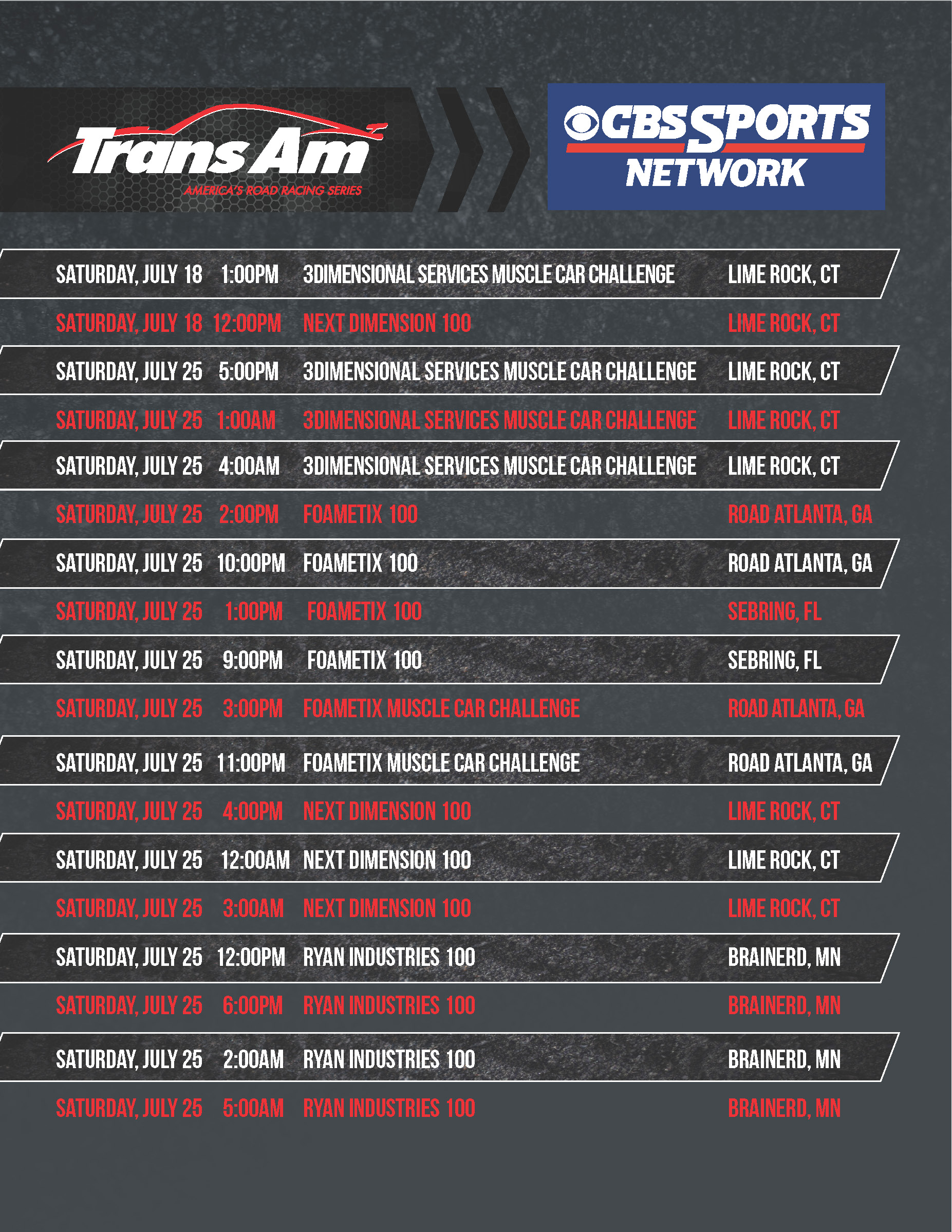