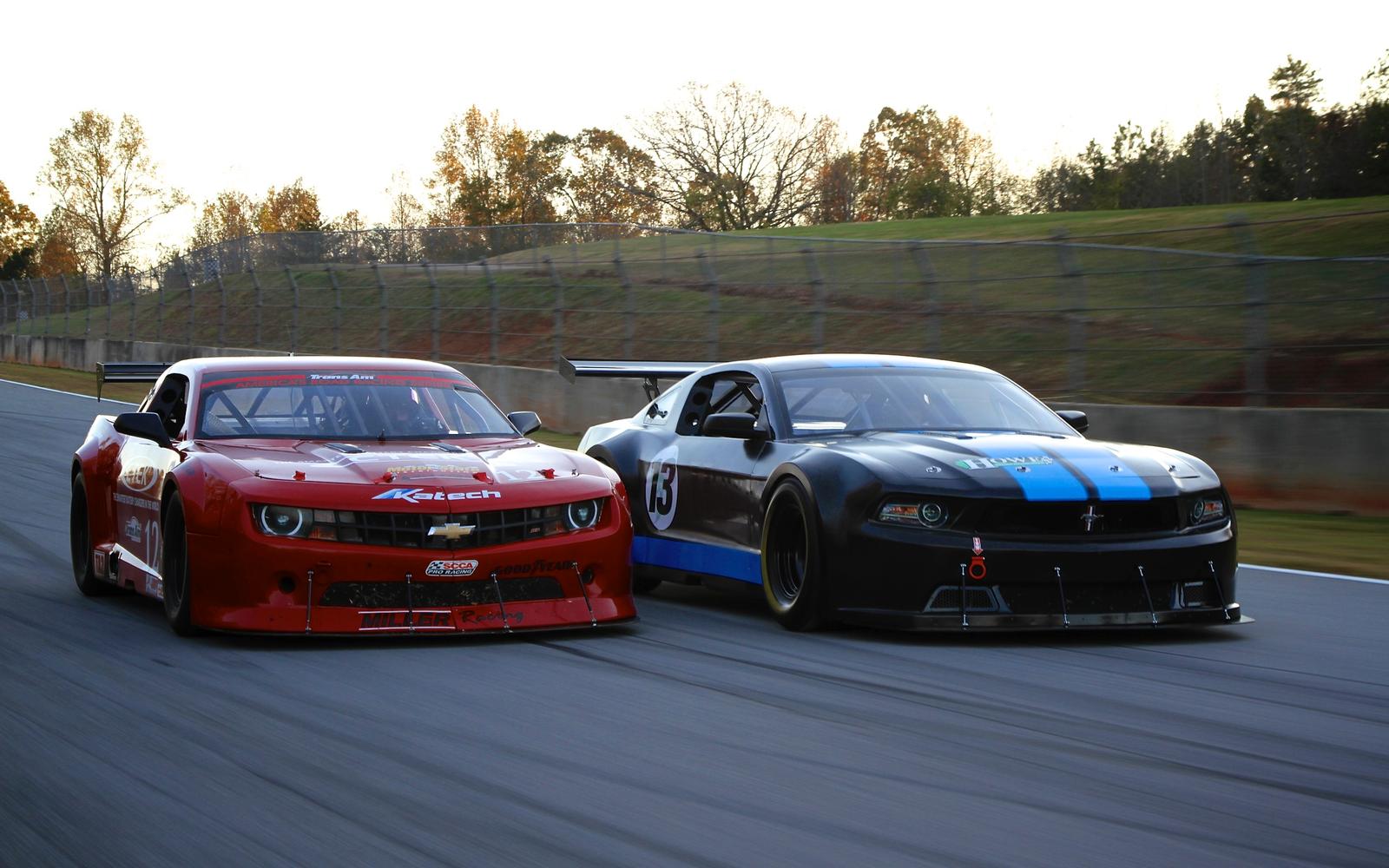 MIAMI- December 21, 2012 – While the Trans Am Series has a long and storied history full of races and rivalries, none stand out quite like that of the Ford Mustang and the Chevrolet Camaro—two iconic and quintessential American cars forever linked by a competition that transcends racing.  They have inspired generations of car enthusiasts, racers and fans.  And now, once again, they are going head-to-head in the Trans Am Series.

“Mustang versus Camaro is one of those rivalries that resounds for all fans of motorsports, or even just cars,” said President of the Trans Am Race Company John Clagett.  “When we had the Camaro enter what was the TA2 class, we had a huge outpouring of interest, and entries into the class skyrocketed. We’re excited to see if we get a similar response with the Mustang’s addition.  Really, this is what Trans Am is all about—Mustang versus Camaro, Ford versus Chevrolet. This is going to be racing at its’ finest.”
It has been the better part of a decade since these two iconic models competed against each other in the Trans Am Series.  Still, memories of Mustangs driven by greats like Dorsey Schroder and Tommy Kendall and Camaros pushed to their limits by Scott Pruett and Scott Sharp have persisted in the minds of Trans Am fans and drivers alike.
In 2011 Trans Am introduced TA2. It was the first time the series featured a second class since 1979.  Originally, TA2 mostly consisted of SCCA GT2 and GTA cars, but momentum quickly increased along with entrant interest.  This was due to the high performance to cost ratio within competition.
Shortly after the class’s introduction, the Camaros arrived on new purpose-built chaises for the TA2 class and took the field by storm.  By the time 2012 came around, there were 14 different bowtie-badged pony cars in the Trans Am paddock. This time many were powered by Chevrolet’s LS3 engine, ushering in a new era of competition for the class.
Now another piece of the puzzle has fallen into place as the Trans Am Series and Howe Enterprises have announced the addition of the Ford Mustang to the TA2 class in 2013.
“The addition of the Ford Mustang to the TA2 class is a huge step for the Trans Am Series as we continue to grow and move forward,” Clagett said.  “We now have Ford versus Chevrolet in both the TA and TA2 classes, and that’s something that the fans have been waiting for, and it’s something we’re finally able to deliver on.”
The quick growth of the TA2 class has been attributed to the performance teams receive for their given investment.
“It was one of the reasons we joined the series,” said Cameron Lawrence, a current participant in the class.   “Outside of karting, you really can’t find this level of performance for the price. We’re driving fast, powerful cars out there that can outmatch anything else for the investment you put into them.  It’s just a great series and class to be a part of, and I’m not surprised at all that it has grown this fast.  The cars, the teams and people in the paddock—this is a racing family, and I’m glad to be part of it.”
The strength of the class’s growth has also been attributed to TA2’s relevance on the show room floor and how the new models resonate with the both the consumer and the fan.
“When you look at these Mustangs and Camaros, you have a machine that looks just like the ones you find in a showroom,” Clagett said.  “You see it, and without thinking, you know it’s a Mustang, or you know it’s a Camaro.  They have the same style and the same soul. Fans can drive to the track in a Mustang and see a car that looks very much like theirs racing around the course, and that’s a special experience.”
Chas Howe, of Howe Enterprises, expects demand for the Mustang chassis to be high, just as it is for the current Camaro chassis they offer.
“We’re extremely proud to be able to develop this product for drivers and fans alike,” Howe said.  “The Ford Mustang is much more than a car. It’s an icon, and it belongs in racing.  With that said, we do expect these cars to be in demand, and a waiting list is going to develop quickly. Anyone planning to race one in the 2013 series should be placing their orders soon.”
While the 2013 TA2 class will feature both legendary models, the Trans Am Series is not looking to stop there. Plans are in motion to bring the Dodge Challenger to the mix in 2014.
blog comments powered by Disqus