Championships on the line in VIR Muscle Car Challenge, VIR Trans Am 100

ALTON Va. [September 18, 2018] — With only three rounds remaining in the 2018 Trans Am Championship presented by Pirelli, the Trans Am Series heads south to VIRginia International Raceway (VIR), one of the series’ more modern homes.

The 3.27-mile, 17-turn circuit has played host to Trans Am nine times in the past, the majority of which coming in Trans Am’s reemergence from 2013 on. The joint weekend with the Sportscar Vintage Racing Association now heralds the beginning of the end, for Trans Am seasons and VIR results often come with weighty title implications.

This year is no different; as a 48-car entry bears down on Alton, Va. for the VIR Muscle Car Challenge, featuring TA2 powered by AEM, and the VIR Trans Am 100, featuring the TA, TA3 and TA4 classes; two 31-lap contests around the VIR circuit for 101.37 miles on Saturday, September 22.

In the TA class, Ernie Francis, Jr., in the No. 98 Frameless Shower Doors Ford Mustang, enters the round with a 28-point lead atop the class leaderboards despite disappointing outings at Road America, where he salvaged points in a back-up car finishing 12th, and at Watkins Glen International, where a mechanical failure saw his day end early to the tune of a 15th place finish.  Still, Francis’ strong performances throughout the bulk of the season have bought him some leeway; and the championship lead remains his as he and the Breathless Pro Racing team arrive in Virginia, where he captured the 2017 TA class win. 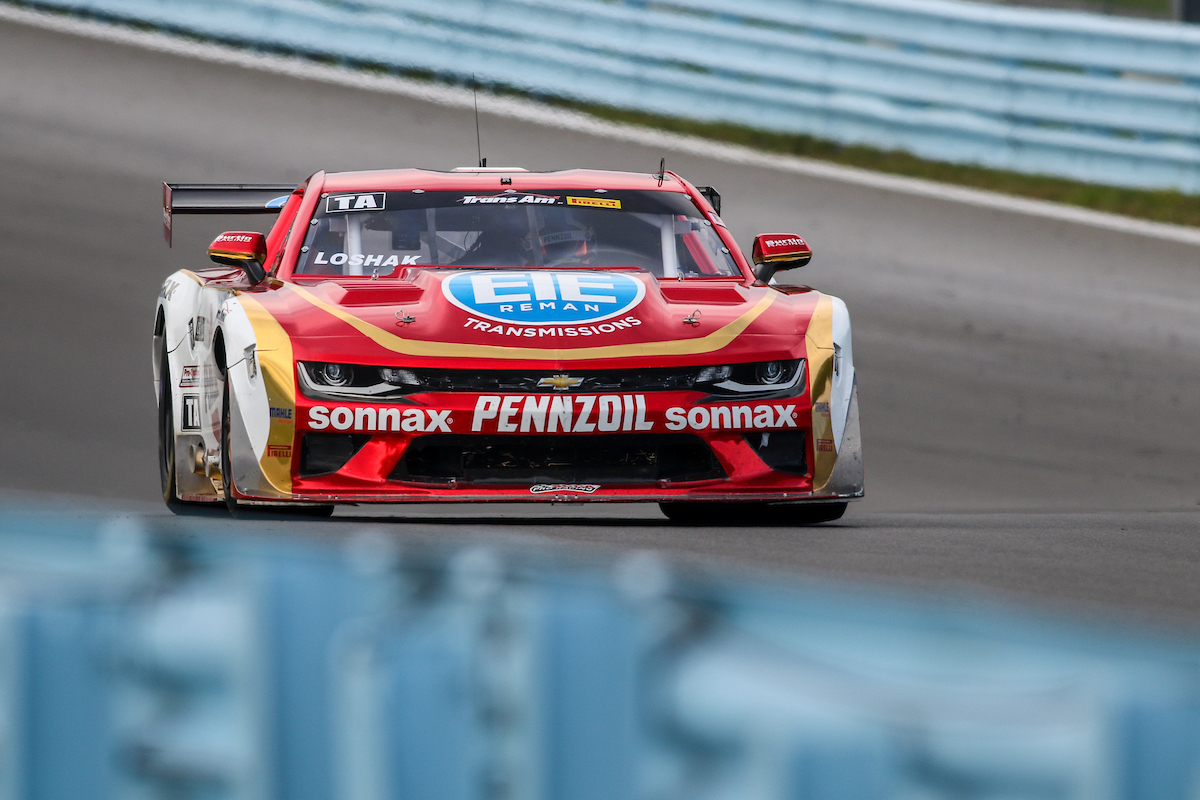 Amongst those surely challenging Francis for the win will be the Burtin Racing team of points-runner-up Lawrence Loshak, in the No. 2 Pennzoil/ETE/GoShare Chevrolet Camaro, and Watkins Glen victor Tomy Drissi, in the No. 8 The Predator Chevrolet Camaro.  Loshak, following strong finishes throughout the core of Trans Am’s season, has emerged as one of the primary challengers to Francis’ title and is tasked with reeling in the No. 98 over the final three races.

Another challenger, six points back of Loshak, is sports car veteran Chris Dyson, pilot of the No. 20 Plaid Enterprises/ CD Racing Ford Mustang. Dyson started the season strong, lockstep with Francis; however, small hiccups intermixed with good results have kept the No. 20 at arm’s reach of the top spot.

While not in the points championship, both Paul Fix, in the No. 4 StopFlex/TheCarCoach/ Ave Racing Ford Mustang, and Boris Said, in the No. 21 Monster Energy/ Weaver Concepts Dodge Challenger, are capable of playing the role of spoiler.   Over the years, Fix has been the man to beat at VIR and has captured three consecutive victories in 2014, 2015 and 2016.  The No. 4 has had the pace for the front of the field but has been struck by both mechanical issues and other competitors over the past few rounds keeping Fix out of the winner’s circle.

Said’s return to Trans Am has gone well, despite a mechanical failure while in the lead at Watkins Glen, with a podium finish at Mid-Ohio and a Road America victory to his credit.  Said also has a previous Trans Am win at VIR, coming in 2002.

Trans Am’s TA2 class sees Rafa Matos on the cusp of clinching the championship on the back of a stellar 2018 season that has seen the No. 88 3-Dimensional Services Group Chevrolet Camaro top the podium five times in nine races while only missing the podium twice.

Now Matos arrives at VIR on the back of a Watkins Glen win and with a 58-point buffer between him and runner-up Tony Buffomante, making it mathematically possible for Matos and the No. 88 to clinch the championship before the close of the weekend.  Still, there’s work ahead for Matos if he is to wrap up the title before the end of the season. 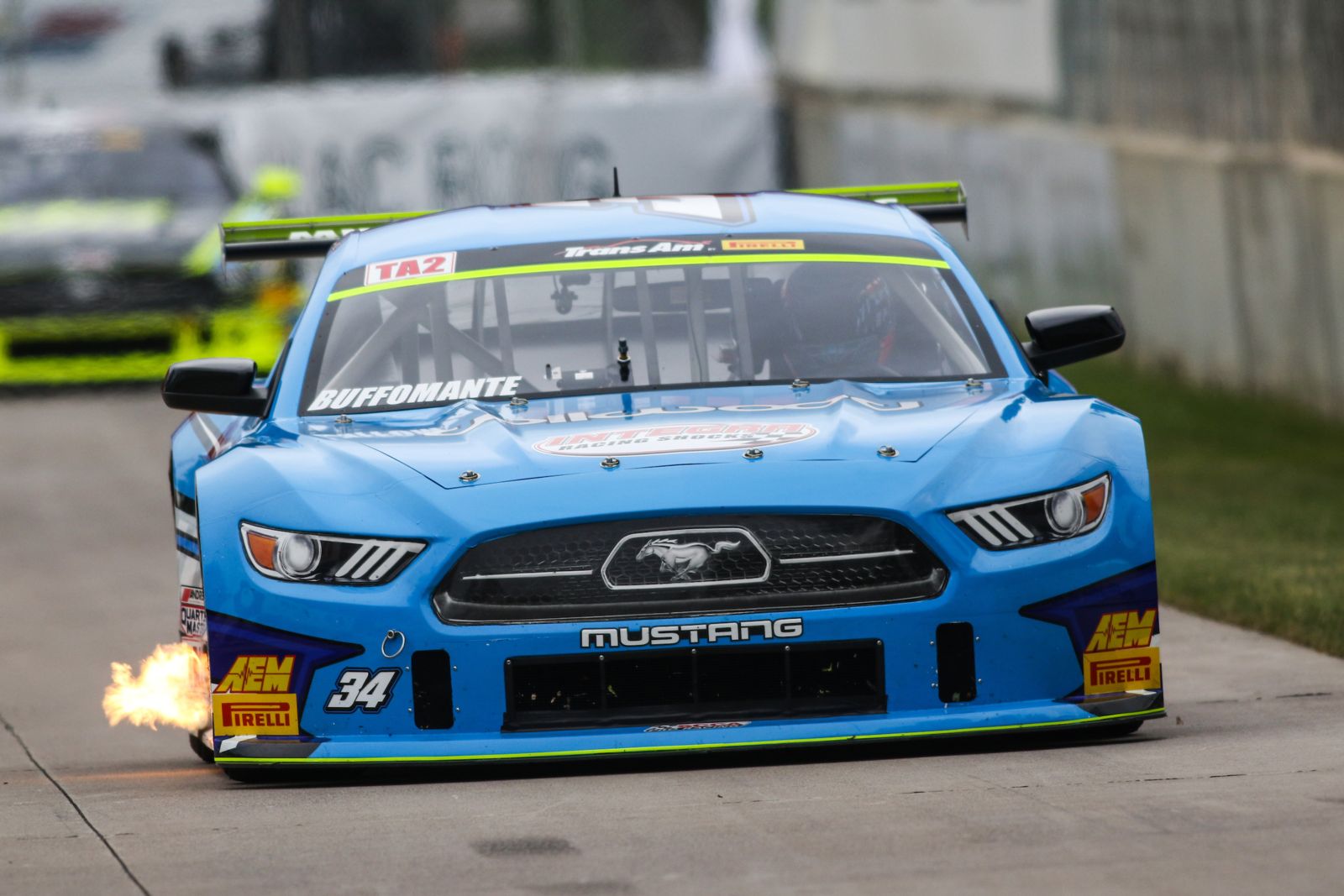 Buffomante, in the No. 34 Mike Cope Racing Ford Mustang, has always been strong at VIR.  In his first Trans Am appearance at the track he set the TA2 pole in 2014, finished third in 2015 and won the race outright in 2016, on the way to a TA2 championship of his own.  With the math against him, Buffomante is free to chase another TA2 win in the hopes of keeping the championship battle alive yet another round.

Buffomante’s Mike Cope Racing teammate Keith Prociuk, in the No. 9 HP Tuners Chevrolet Camaro, enters the round third in the championship points, reaping the rewards of a season in which he has only missed a top ten finish twice.

Prociuk’s primary challenger for the year-end podium finish is Ethan Wilson who is well on his way to rookie of the year honors in the No. 49 Berryman/ Prefix Dodge Challenger, one of three drivers hailing from the Stevens-Miller Racing tent. Anthony Honeywell, in the No. 76 Honeywell Competition/ Prefix Chevrolet Camaro, and rookie Brian Swank, in the No. 11 Royal Flush/ Prefix Dodge Challenger, will also feature for Stevens-Miller at VIR.

Scott Lagasse, Jr., in the No. 95 SLR/ Lawrence Equipment/ M1 Fastrack Chevrolet Camaro, has enjoyed success throughout the second half of the season with three consecutive podium finishes and a Watkins Glen pole, his career first.  The No. 95 suffered a mechanical failure while in the lead at the Glen and  on the cusp of victory, but Lagasse has proven he  has the pace.  Now Team SLR pairs with Fields Racing, based out of Richmond, Va., and the No. 96 Fields/ Lawrence Equipment/ M1 Fastrack Chevrolet Camaro, of Chris Liesfield; perhaps giving Lagasse the assistance needed for an illusive victory.

2010 and 2011 TA class champion Tony Ave will pilot the No. 25 BC Race Cars Chevrolet Camaro, looking to bolster a career that includes 18 Trans Am Series wins and 32 fast qualifiers.  Mike McGahern, in the No. 48 BC Race Cars/ Ottawa Solar Power Chevrolet Camaro, will share the BC paddock with Ave.

Another prior TA class champion in TA2 action will be Matos’ Coleman Motorsports teammate Doug Peterson, the 2012 and 2013 TA champion and driver of the No. 87 3-Dimensional Services Chevrolet Camaro. 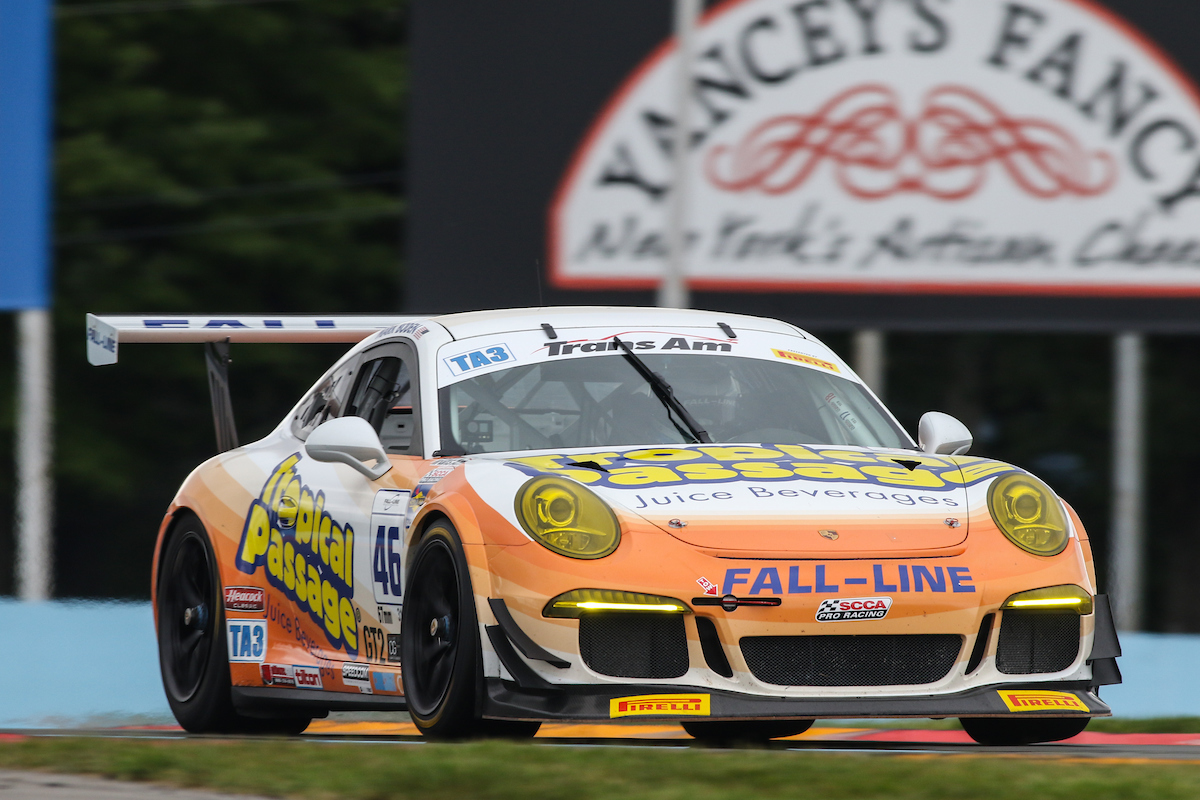 Cipriani’s season has been one characterized by consistency, in both result and entry, highlighted by a second place finish at Pittsburgh International Race Complex in her No. 60 Ginetta USA Ginetta G55.

Inversely, Boden and the No. 46 Fall-Line Motorsport Porsche 991 GT3 Cup have missed three rounds of action but have been devastating in every appearance with three wins and are yet to finish outside the top two.  Boden’s Fall-Line teammate Tom Herb, in the No. 16 Fall-Line Motorsports Porsche 991 GT3 Cup, has had strong finishes as well, particularly as of late with second and third place results at Mid-Ohio and Watkins Glen.

The Lux Performance duo of Cindi Lux and Dirk Leuenberger will also be in attendance, piloting the No. 45 and 35 Lux Performance Group Dodge Vipers.  Lux won last year’s TA3 competition at VIR, and will look for a similar result after being sidelined at Watkins Glen with mechanical issues.  Leuenberger would go on to represent Lux Performance well in her absence, turning in a career-best second place finish— eclipsing a mark of third just a round before at Road America.

Dave Ricci, in the No. 77 Breathless Racing Chevrolet Camaro, is also set to attend as he continues his own pursuit of a year end podium finish and iscurrently battling with fellow entrants Tom Herb and Milton Grant, in the No. 55 Sentry Self Storage/ Fairfield Inn Porsche 991.1.

As of the publication of this release, Marko Radisic, in the No. 12 Precision Driving BMW M4 GT4, stands the only entrant in the TA4 class, jumping over from the TA3 class.

Trans Am features on the weekend alongside SVRA’s Heacock Classic Gold Cup.