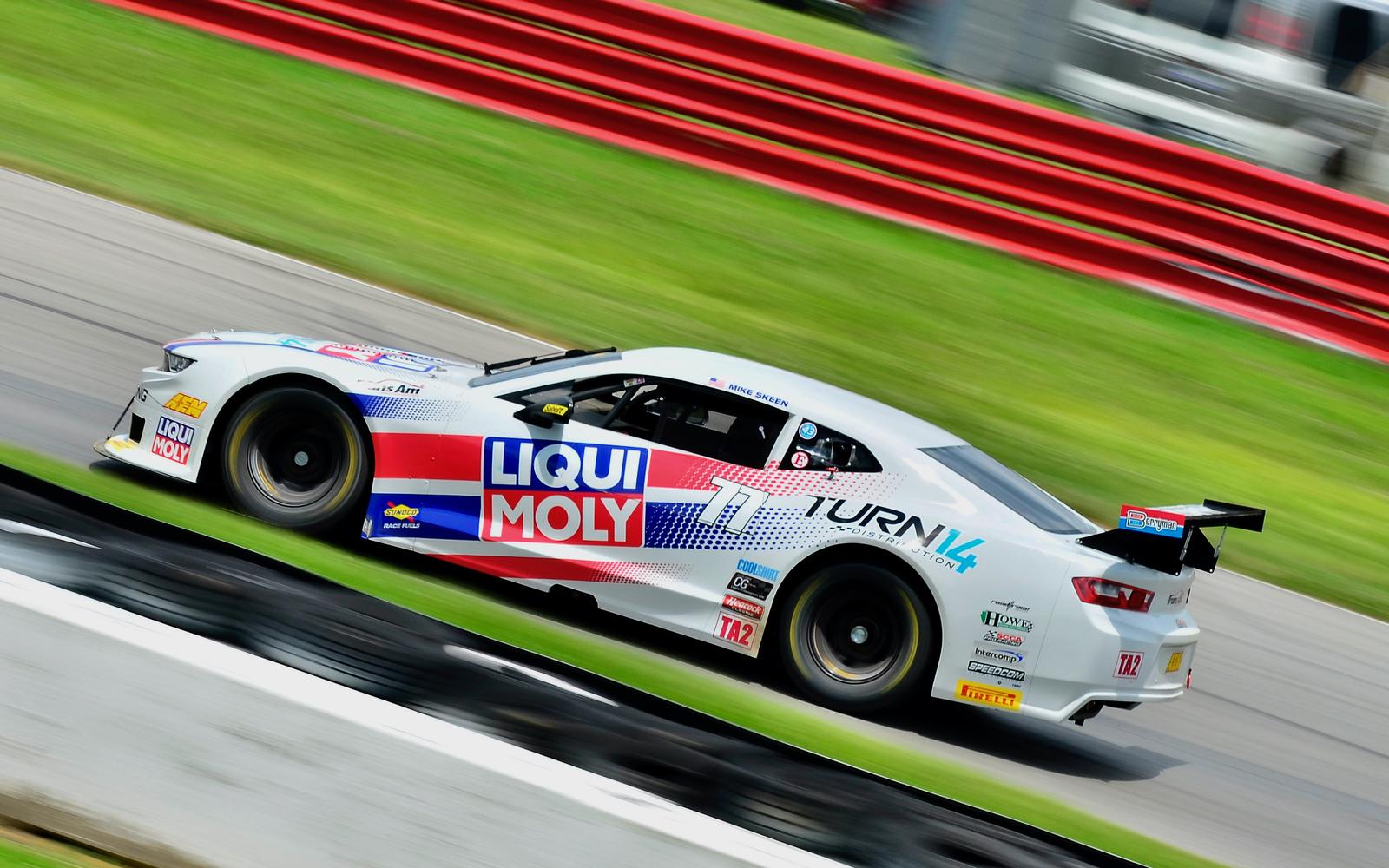 Columbia City, Ind. – The resumption of The Trans Am presented by Pirelli season at Mid-Ohio was, by all accounts, one for the ages. The TA2 race was no-holds barred right from the start, culminating with a final lap that was a true barn burner.

Despite the Mid-Ohio results being under review by SCCA, it was still a great race, said Stevens-Miller Racing (SMR) owner Joe Stevens. “The Mid-Ohio race is still front and center in our minds. It had everything — great racing, the return of spectators, live streaming, and a controversial finish!”

Skeen said, “It was great to get back to racing at Mid-Ohio. My Liqui Moly, Turn 14 Distribution, Howe Racing Enterprises, Camaro has been great. We’ve won and contended for the win at the first two races and I look to keep the momentum going. Brainerd is a new venue for me, which is exciting — the track looks fast and I know the competition will be steep. Mid-Ohio was really fun and I can’t wait to pick up where we left off.”

After a best-ever finish at Mid-Ohio, Alex Wright is making his first trip to Brainerd. He said, “After the wild race at Mid-Ohio, I’m ready to get after it again as we contend for the Northern Cup! My SMR Berryman Products Mustang was absolutely great at Mid-Ohio. I had a really fun race with three of us dicing it up, flag to flag. My confidence is high and my top 10 finish is something we can definitely build on. Brainerd will be a tough field and a real challenge. It’s going to be great to have spectators again and with free admission there could be a pretty good crowd.”

“Southern Cup contender JP Southern Jr. and his ProcureIT Network Camaro will be sitting out Brainerd but will be with us in spirit,” Stevens said. “JP has converted his esports success to the track and it’s been great to see. He was a regular top-five finisher in Trans Am’s esports series and now he’s a top-five threat on track. JP’s a great young talent and we look forward to supporting his efforts this season.

“My guys did a great job at Mid-Ohio and Mike drove his butt off. Although we won’t know the final results until the SCCA review is complete, one thing we do know is we have a 20 point-plus lead in the championship heading into this weekend.

“I have to thank Liqui Moly, Berryman Products, Chas Howe, and everyone who has stood by my team during these times. It means a lot not just to me but to everyone on our team. It is a privilege to represent these companies.

“I also have to take my hat off to Trans Am, the live streaming of our races has been exceptional. Friends, family, sponsors and fans are all telling me they love it and it’s just the shot in the arm we need. The racing in TA2 is second to none and I’m thrilled people are getting to watch us in action.”

Stevens-Miller Racing (SMR) has one of the highest winning percentages in Trans Am’s TA2 category. SMR’s staff has earned 30+ podiums, three championships, multiple Hard Charger Awards, Rookie of the Year, and more. The team’s focus is achieving the driver’s desired goals. Whether that’d be just having fun, developing driver skill, or winning championships, SMR does it all and has the winning history to back it up. See www.stevensmillerracing.com for more details about our programs and Arrive & Drive opportunities.