Virtual resurrection for fabled track rich with Trans Am history

Riverside, Cali. (30 May 2020)- For the first time in more than 30 years, the sounds of American thunder carried through the dusty hills of Southern California at Riverside International Raceway on Saturday afternoon as the long-lost circuit played host to Round 5 of the Trans Am by Pirelli Esports Championship.

“I wish this track was still around,” Kicera said. “I’d love to take our TA2® car out there and turn a few laps. Such a cool track with cool corners. The track was very tricky and a lot of fun. All in all, I wanted to pace myself and not make mistakes, because it’s easy to overdrive this track and find yourself off course.”

In a nail-biting qualifying session, pole position was determined by .001-seconds as the Trans Am by Pirelli Esports Championship continued to deliver close competition as Sevadjian claimed the point over Cam Ebben (No. 55 Lamers Motor Racing) with a fast lap of 1.34.79-seconds.

Pole setter Sevadjian’s speed carried through to Race 1, as he led in the No. 38 Big Machine Vodka/Leadfoot Racing/Duntov Motors machine nearly uncontested from the drop of the green flag to the wave of the checkered. The error-free drive earned Sevadijan his maiden esports victory. 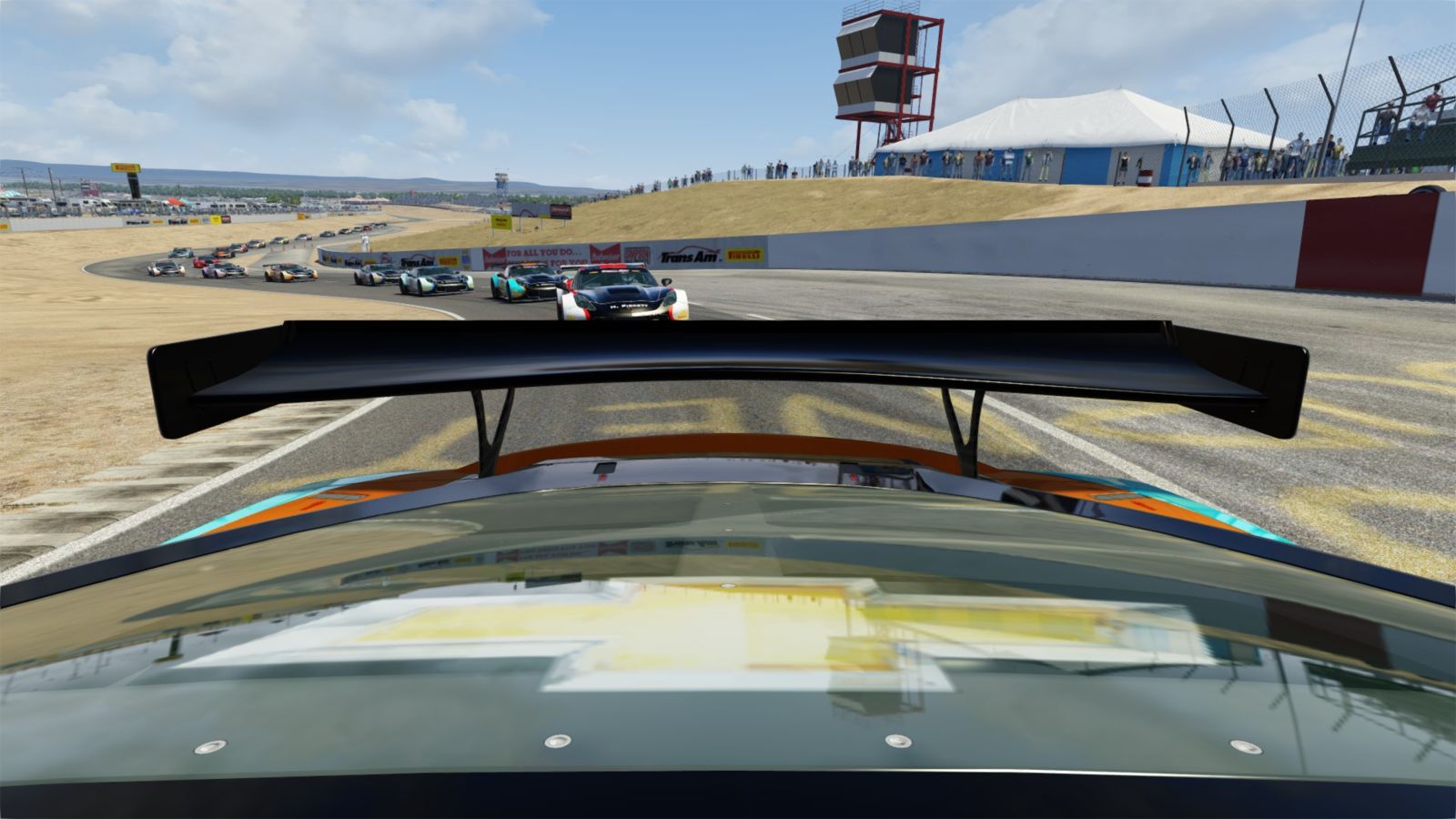 “I maintained the gap and then slowed down just a bit at the end to make sure I didn’t make a mistake,” said Sevadjian. “It’s so easy to put a tire off in the dirt here and spin out. I’m happy to have the opportunity to race at such a historic venue.”

Reigning Trans Am champion Ernie Francis Jr (No. 98 One South Florida Wealth Advisors) started fourth and worked his way up to second by the end of Lap 2  after both Ebben and Dylan Archer (No. 32 Archer Brothers Racing) fell down the order in separate off-track incidents.

But, in the short time it took Francis Jr. to slot into second, Sevadjian had already built a second and a half gap, which in the end was just too much for Francis Jr. to recover in the 12-lap race. The six-time championship winner settled for a second-place finish.

“Ed (Sevadjian) was really quick, and I didn’t have enough to really close in to make a move,” said Francis Jr. “It was a very good race, and not bad overall for points. I loved Riverside. I wish it were still around, I would love to run laps around it with our Trans Am car. I can’t believe how fast the place is. It’s insane to run around.”

“It wasn’t as dramatic as I thought it was going to be,” said Merrill. “This was a tough track and several drivers wrecked in front of me. But, I was pleased to come out of it unscathed. It’s a crime this place doesn’t exist anymore. It’s a wonderful track and really, really fun.”

For Race 2 on the inverted grid, Carl Rydquist (No. 46 MyRaceShop.com/Prototype Development Group) started on pole. Carrying an 80kg weight penalty from last week, Rydquist fell back in the order as drivers behind him started to reach top speed. By the close of Lap 1 Devlin DeFrancesco (No. 17), who has not raced a Trans Am car in real life, lead his first lap of the championship after starting second. 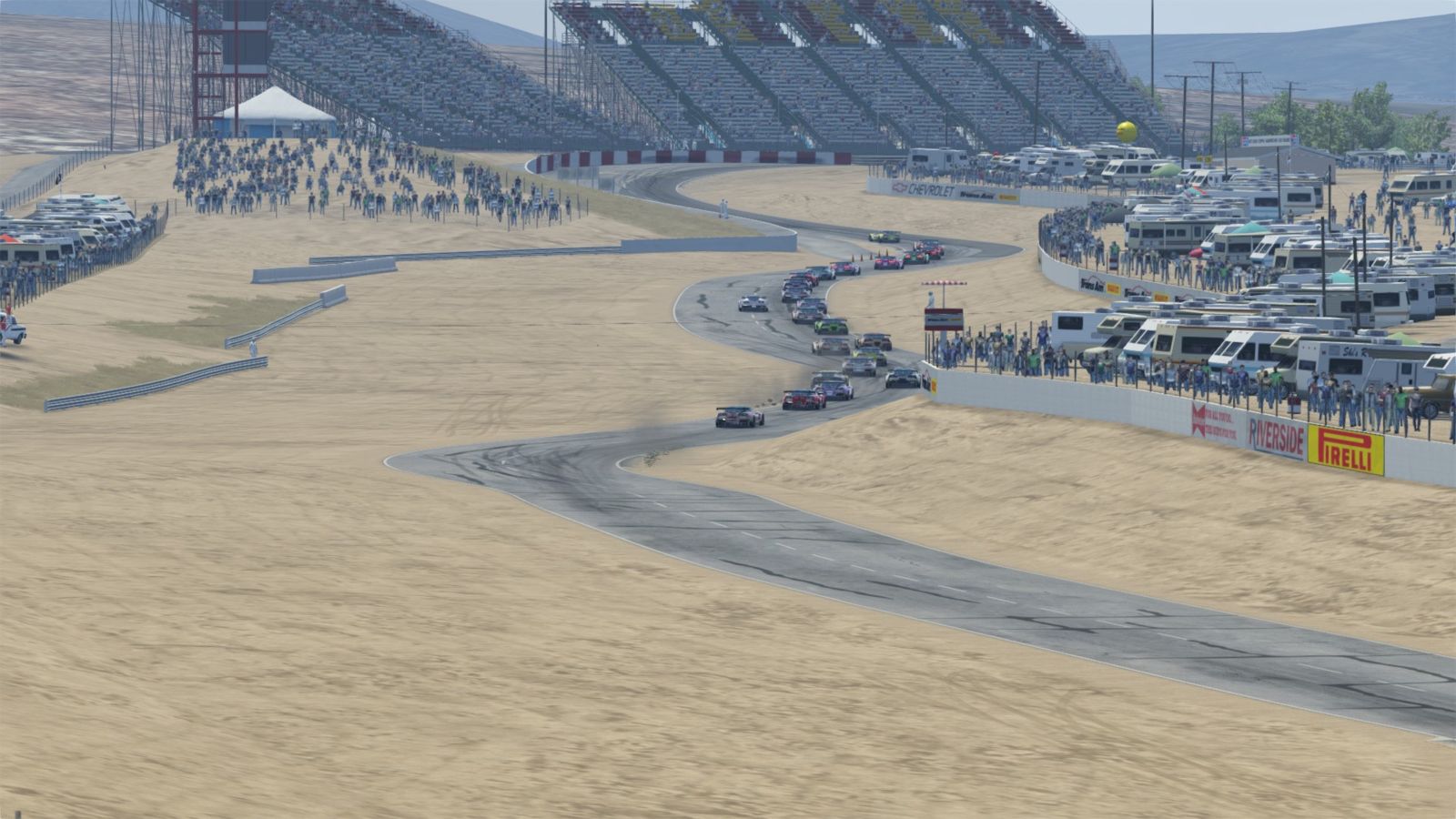 But two-time TA2® champion Cameron Lawrence (No. 8 3 Dimensional Services Group/Peterson Racing) wasn’t letting the rookie off that easy. DeFrancesco and Lawrence diced for position with Lawrence briefly taking the lead before DeFrancesco paid back the favor.

Watching the action play out in front of him, Kicera patiently waited for his opportunity to pounce. Getting tapped from behind by Lawrence, DeFrancesco shot wide, leaving an opening for Kicera to slot into second and close the gap on the leader.

The pair of fire-breathing machines worked each other through two turns side by side until  Kicera made an incredible move. Going high and wide into Turn 9, Kicera swooped down from the banking to take first from DeFrancesco where he stayed for the duration of the race.

The pass left DeFrancesco a little rattled and on his hunt to retake the lead, the young Canadian pilot spun across the circuit, making contact with another driver, ending his charge for a podium finish.

Nursing a wounded car, Lawrence was unable to make progress on Kicera, and finished the race in a lone second place.

Hurley, who was also carrying a 40kg weight penalty from last round, capitalized from others’ misfortunes, charging from a sixth-place start to finish on the podium in third. Merrill finished in fourth with Rydquist holding on to round out the top five.

“That was a stressful race, especially with the added weight,” Hurley explained. “The weight here cost about six-tenths of a second per lap. I was able to finish ahead of (Tyler) Kicera in the first race which allowed me to keep the championship lead.”

Hurley leaves Riverside with a four-point advantage over Kicera (277 points to 273 points) with Francis Jr. in third, earning 245 total points.

David Donohue joined the Trans Am by Pirelli Esports Championship lineup for the first time to honor his late father’s (Mark Donohue) legacy at the infamous Riverside International Raceway. Driving with a broken wrist, Donohue finished his first ever esports competition just outside the top 10 in 12th place.

“I have a cast on because I had wrist surgery and the cast kept hitting my brake settings,” Donohue explained. “I got into some people and that’s not how I race. I don’t like doing that to someone else’s race.” 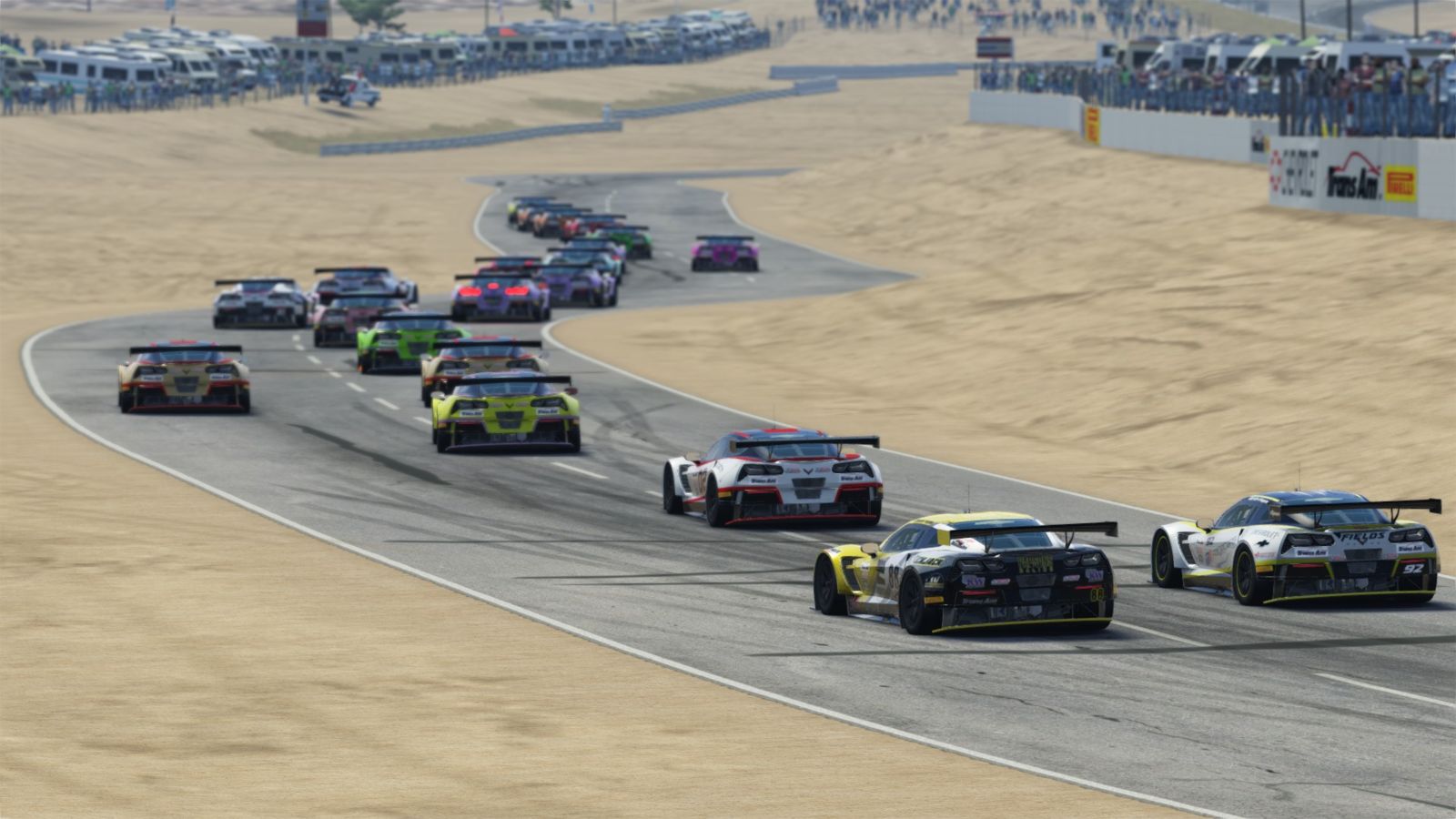 Riverside closed before Donohue’s racing career started, so Saturday was the second-generation driver’s first attempt on the 3.3-mile, nine-turn circuit.

“This was a great track, but I believe my father ran a different course back then,” said Donohue. “Too bad it’s not around anymore. I never raced there but it would be up there with Watkins Glen, Sears Point, Elkhart Lake, all the classics.”

Round 6 of the Trans Am by Pirelli Esports Championship continues Saturday, June 6 at 3:00 p.m. Eastern. The next course will be announced later next week.