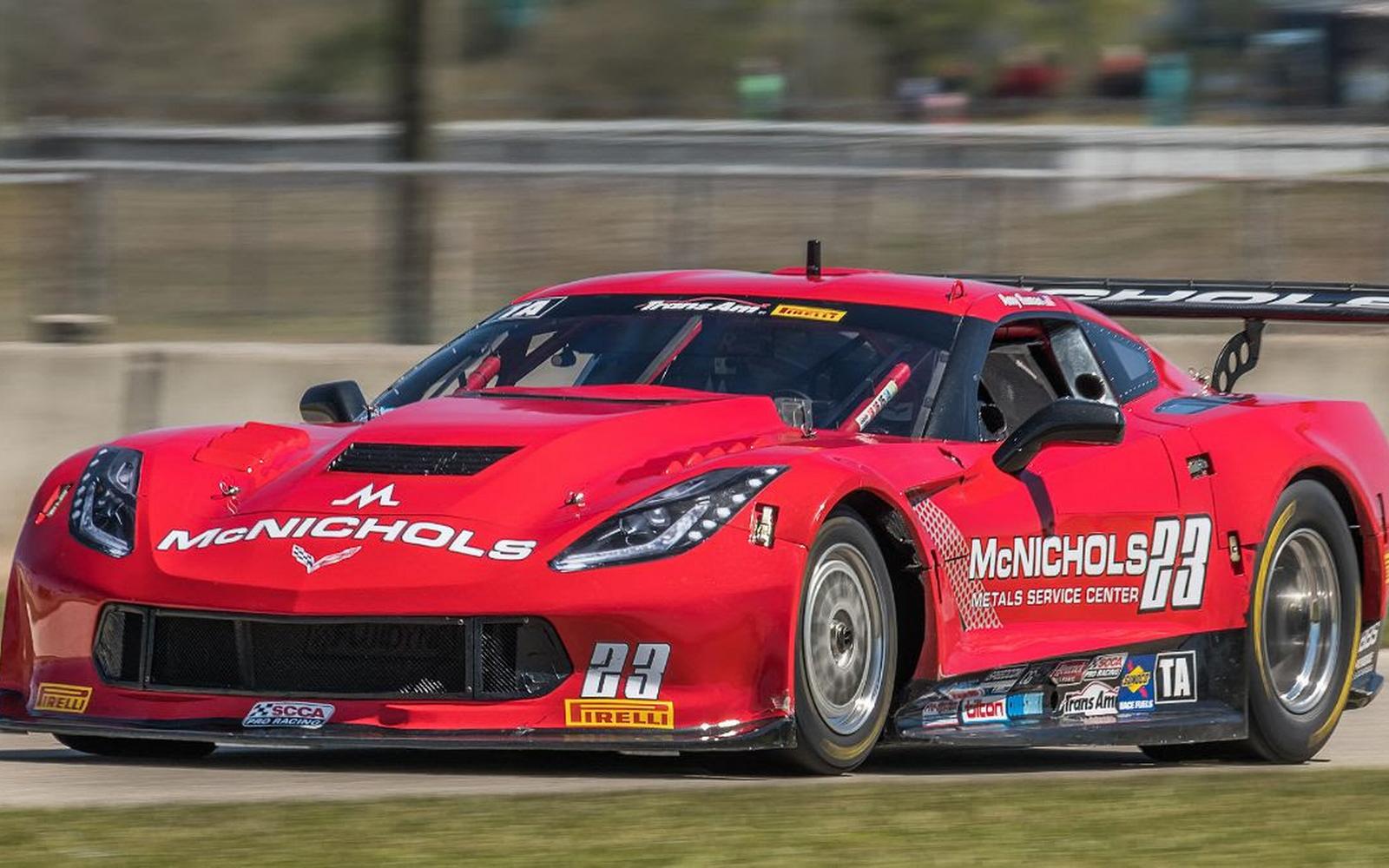 Munroe Falls, Ohio – The Trans Am Series Presented by Pirelli is back in action this weekend at the traditional Memorial Day Classic at Lime Rock Park, CT, Round 4 of the Championship lineup. After an absence on the TA schedule the last four years, teams will be returning to run on the famous and historic “bullring” track.

This will be Ruman’s fifth appearance in the No. 23 McNichols Co. Corvette at the New England circuit and she will be looking to best her two 3rd place finishes in 2012 and 2015. The rapid, short 1.5-mile, seven-turn natural terrain road course has one of the highest average-speed laps of the season. A track that rewards momentum through the iconic circuit, it features corners with names like “Big Bend,” “The Uphill,” “West Bend,” and the final turn called the “Downhill,” a corner that launches the field down the front stretch as lap times click off in less than one minute!

“Mother Nature has a habit of making Lime Rock a wet race weekend, so we are hoping that she decides to keep it nice and dry for us. I’m excited to return here—this track is super challenging because it’s so short and fast. You must be precise here and cannot afford to make any mistakes, otherwise it can bite you quickly. The uphill is always interesting, our cars catch a lot of air there and it can be exhilarating that’s for sure! I know the fans are happy we are back; the festivities and spectating here is awesome!” exclaimed Ruman.

“Even though we will be going to work and having some fun, we must remember the true meaning of Memorial Day weekend – to remember and honor those who have sacrificed their lives to serve for us in our Armed Forces. So in the midst of our bbq’s, picnics, and racing, let’s be sure to remember and say a prayer for the service men and women we have lost and their families,” remarked Ruman.

Ruman and team are entrenched in a thrilling Trans Am battle for the Championship with only four points separating second place from fifth. In the 2019 chase for the Trigon Trophy, Lawrence Loshak leads the TA class championship with 100 points, Tomy Drissi in second with – 71, Chris Dyson third – 69, Ernie Francis Jr. in fourth – 67, and Amy Ruman in fifth place – 67 points.

Running in conjunction with SVRA, there will be an awesome showcase of modern and classic cars with an array of racing and festivities for the fans.  There are 36 competitors entered for this weekend’s races across the four Trans Am classes, with 10 entered in Ruman’s TA class. Cars will hit the track Friday and Saturday for testing, practice, and qualifying. The TA2 race Powered by AEM will be held at 12:55pmET on Saturday. The remaining teams will then take a day off as the track continues to uphold its decades-long agreement with the community not to stage races on Sunday. Activities will resume with qualifying and the race for the TA/SGT/GT classes on Monday May 27th. The holiday feature race will be at 1:25pmET – both races will be 67-laps (100-mi). Visit gotransam.com, svra.com, or limerock.com for ticket, full schedule, and all other weekend information.