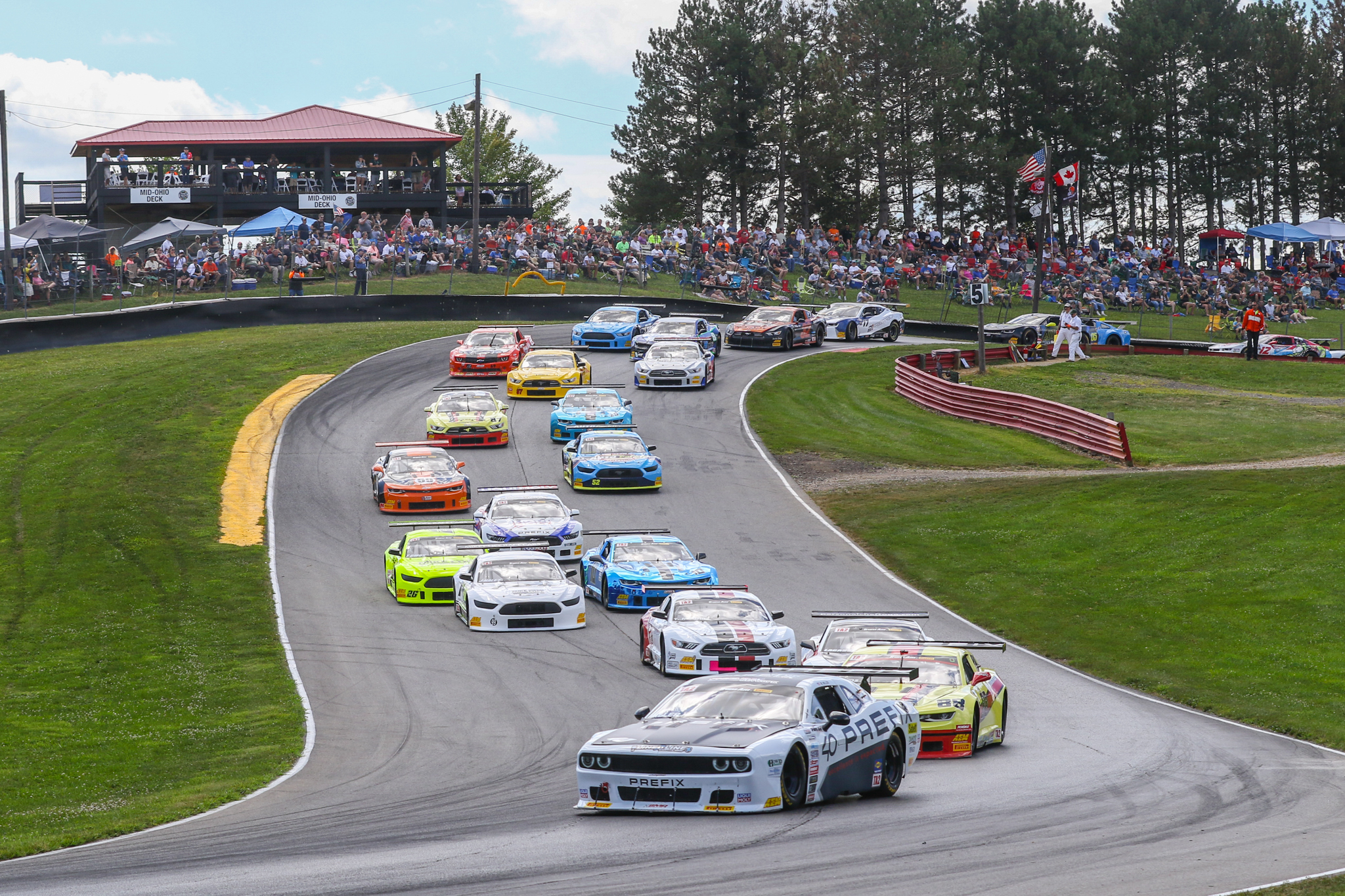 TA2 powered by AEM championship leader Marc Miller made a pass early in Lap 1 and held on for the victory Saturday in the Trans Am Series presented by Pirelli’s FirstEnergy Muscle Car Challenge for the TA2 class at the Mid-Ohio Sports Car Course.

But that description doesn’t do justice to the the thrilling nose-to-tail battle between Miller and Scott Lagasse Jr. through much of the 40-lap event.

With three caution periods keeping the competitors close together, Miller was able to create breathing room between his No. 40 Prefix/Stevens-Miller Racing Dodge Challenger and Lagasse’s No. 92 SLR/Fields Racing/M1 Racecars Chevrolet Camaro for only the final few laps, holding a 2.8-second advantage as the checkered flag flew on his second straight TA2 class victory.

In the second of two Trans Am races competing Saturday at Mid-Ohio as part of the NASCAR Xfinity Series event, 30 American muscle cars took the green flag in perfect Ohio summer conditions. Starting alongside pole sitter Rafa Matos, driving the No. 88 3-Dimensional Services Group Chevrolet Camaro, Miller timed the pass and slid by Matos in the exit of Turn 1 to take the top spot. 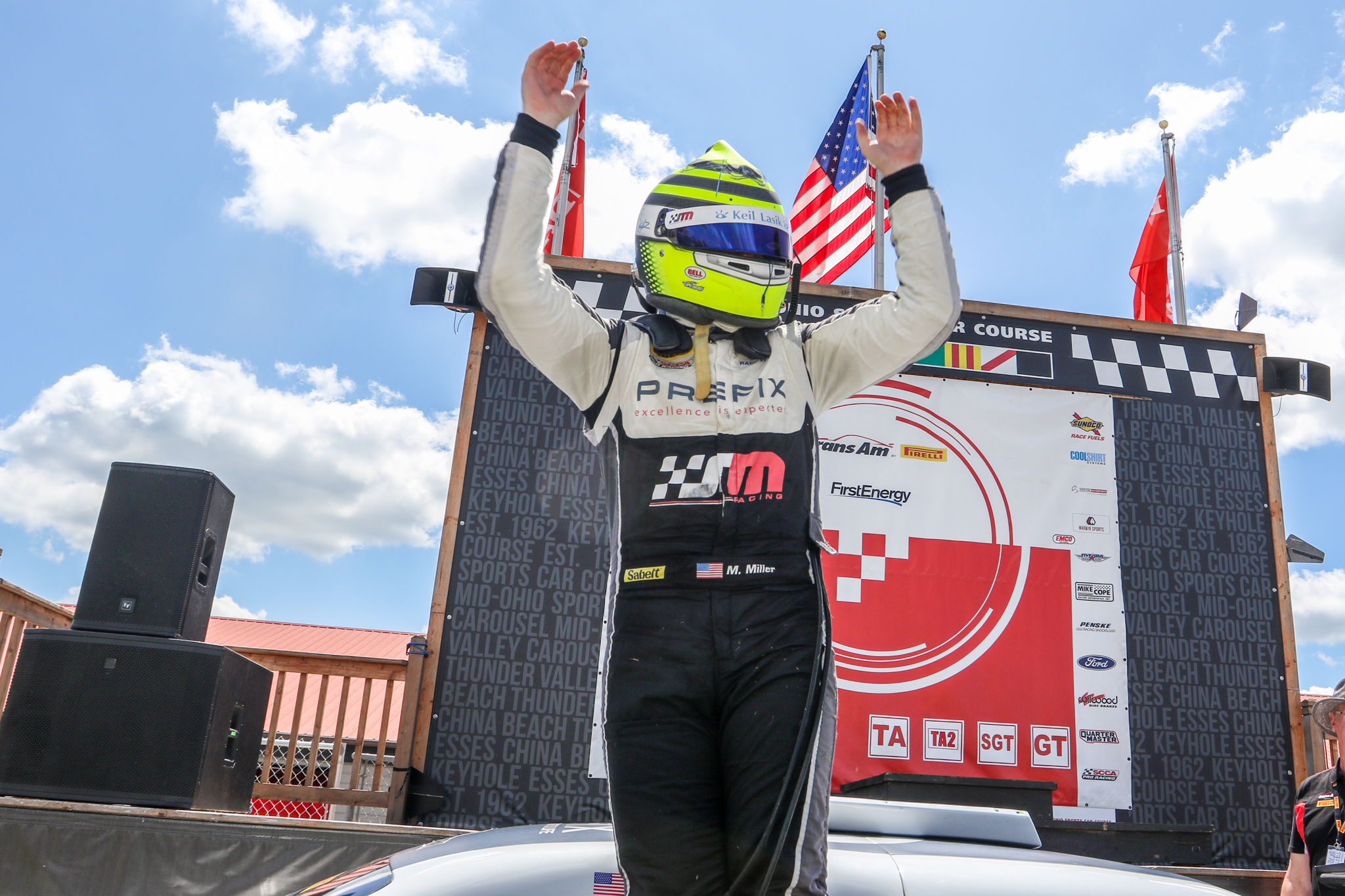 Matos and Lagasse Jr., who started third, exchanged paint side-to-side on the second lap, with Matos getting the worse of it as Lagasse Jr muscled into second position behind Miller. Thomas Merrill (No. 81 Big Diehl Racing Ford Mustang) also took the opportunity to get by and move into third, with Matos back to fourth. Lagasse Jr. peppered Miller with constant pressure, but Miller never put a foot wrong as the race progressed.

NASCAR Xfinity driver Justin Haley (No. 99 Mike Cope Race Cars Ford Mustang) filled Matos’ mirrors, giving the Floridian all he could handle in the fight for fourth in the race’s early stages as Miller stretched out to a one-second lead over Lagasse Jr. By Lap 6, Matos had settled into his tires and began a charge back toward the lead, taking Merrill on Lap 7 for third position. 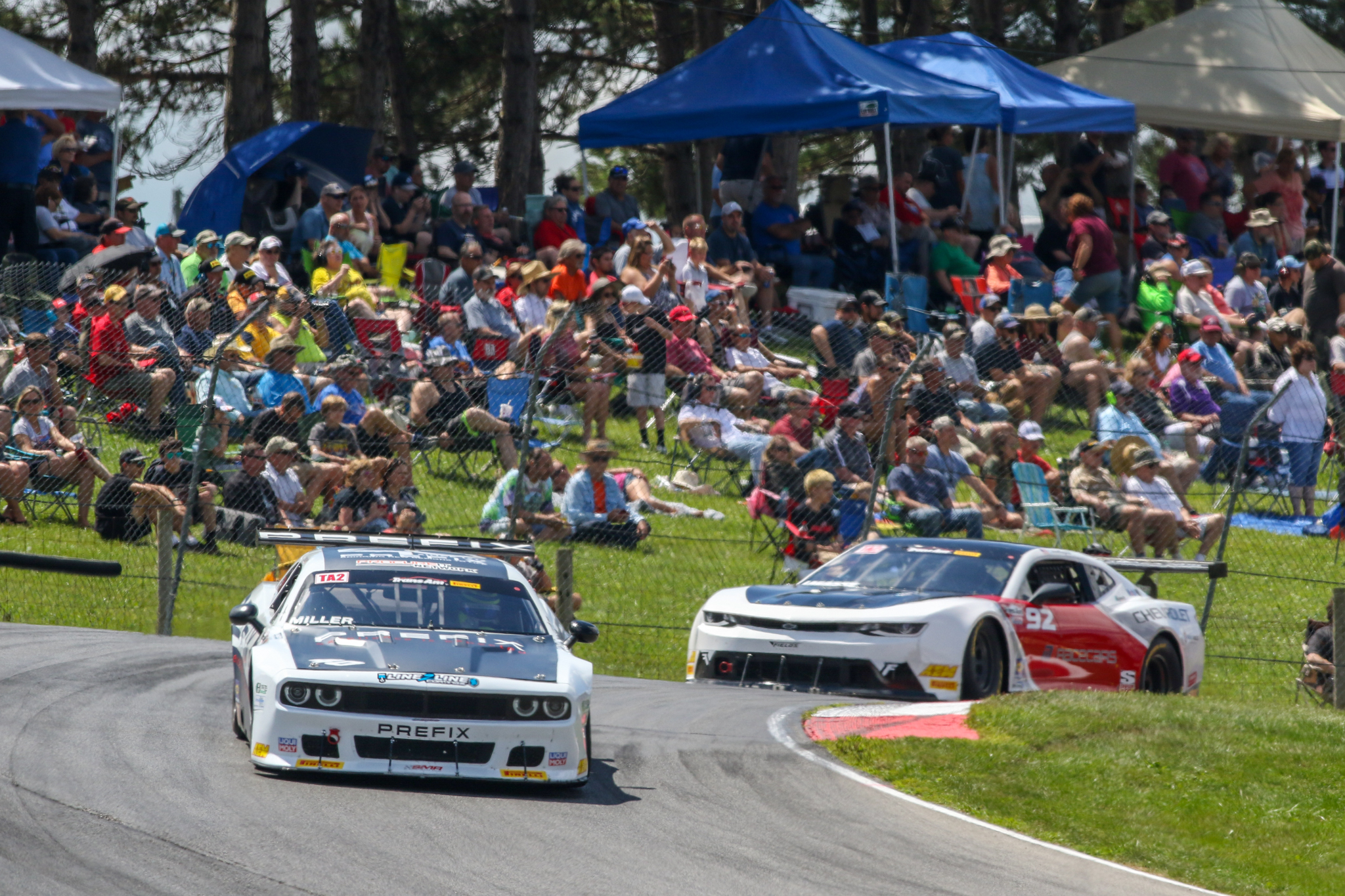 The first caution flag flew as No. 32 Barry Boes and No. 17 Jacob Mosler came together in the Keyhole. When the green flew again, Ty Gibbs (No. 26 Mike Cope Race Cars Ford Mustang) slowed coming out of Turn 2. He tried to pull the car off course but didn’t quite make it, bringing out a second full course caution on Lap 20

Officials made quick work of the retrieval and the cars went back to green – but only for a short while, as Riley Herbst (No. 28 Mike Cope Race Cars Ford Mustang) went into the gravel in Turn 2, bringing out the third and final caution.

When the race returned to green on Lap 25, Lagasse Jr. was glued to the back of Miller’s bumper, looking for an opportunity to get by. But Miller was not to be denied as he kept up the pace, setting the quick race lap of 1:25.801 on Lap 31. He managed to break the draft late in the race and came through for the win.

The Trans Am COOLSHIRT Systems Cool Move of the Race went to Brian Swank, driver of the No. 12 Berryman Products Chevrolet Camaro.

With teammate Dillon Machavern, second in the championship points, finishing down in 23rd position, Miller knew that this was a victory in more ways than one.

"We did not expect to come here and do this well, but the Stevens-Miller racing crew did our homework making the car good in the right spots,” said Miller. “We made it work where the car wasn't as strong. Scott did everything he could to get into my head, and he caught me a few times, but we’d worked on the car for long runs and that’s where it excelled. He could have moved me in a couple of spots, but he didn’t and I trusted him to run clean. It was a lot of good racing! The best thing we could have done is come here making it two in a row and get on a hot streak - that's my mind set now." 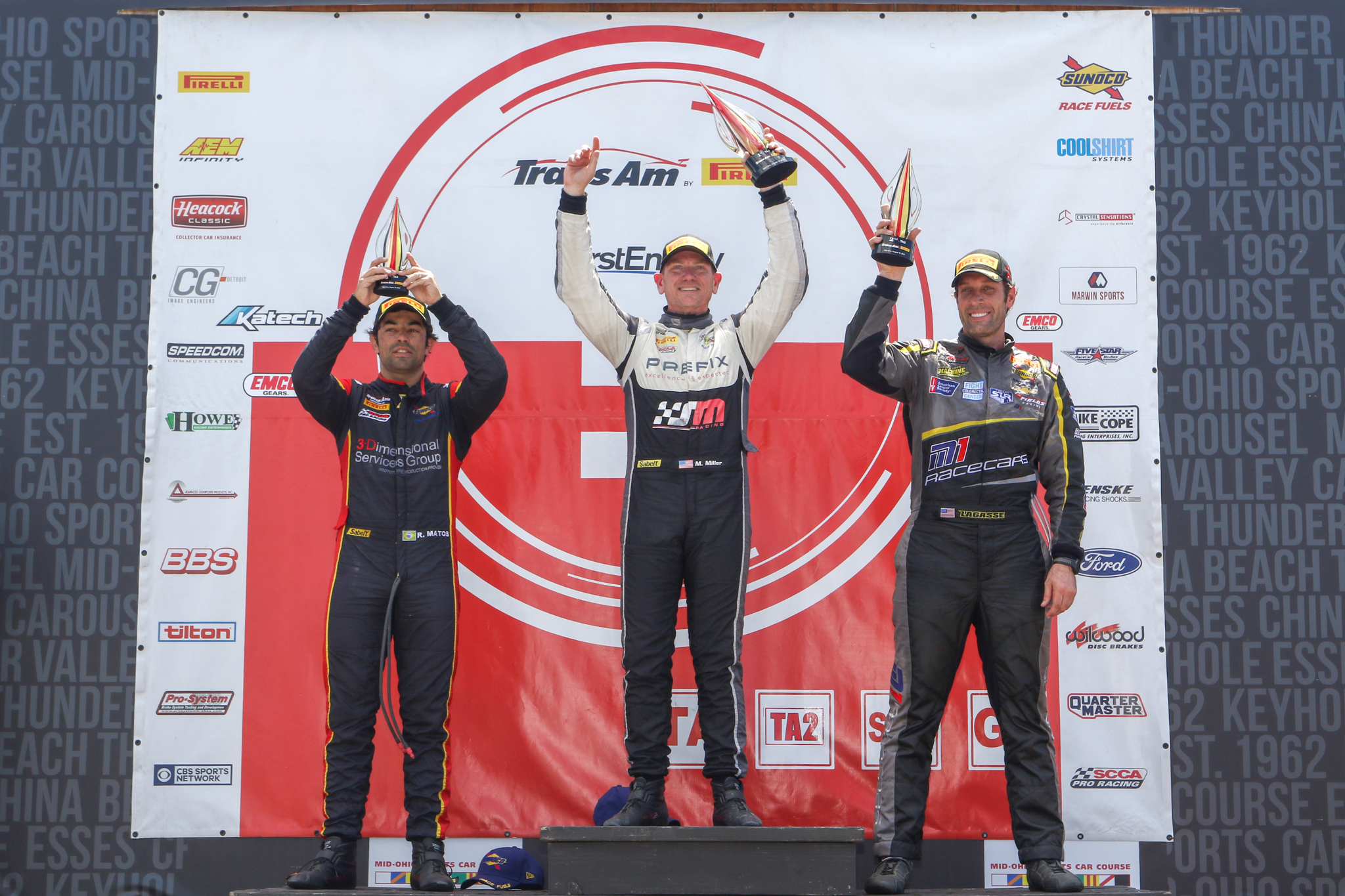 "My car was really good!” said Lagasse Jr. “Handling wise it was phenomenal. We tried to apply the pressure as much as possible to get a mistake out of the leader, to run him down, but we kept it clean. I’m proud of my guys, they worked so hard this weekend. Congratulations to Marc (Miller) on a very fun race.”

After losing ground early, Matos was able to recover to notch another Trans Am podium finish.

"It has been a struggle, but I am happy to have the car back up and running again,” said Matos. “Hats off to my crew who did an amazing job preparing the car this weekend. We struggled with tire pressure at the beginning of the race but at the end I started to catch up. It was a good race and I will take a podium finish. We will try and come back a little bit stronger."

Next up for the Trans Am Series presented by Pirelli will be the Ryan Companies Road America Classic August 22-24. For live timing and scoring, event photos and post-race recap videos visit GoTransAm.com. For live race updates follow @GoTransAm on Twitter.