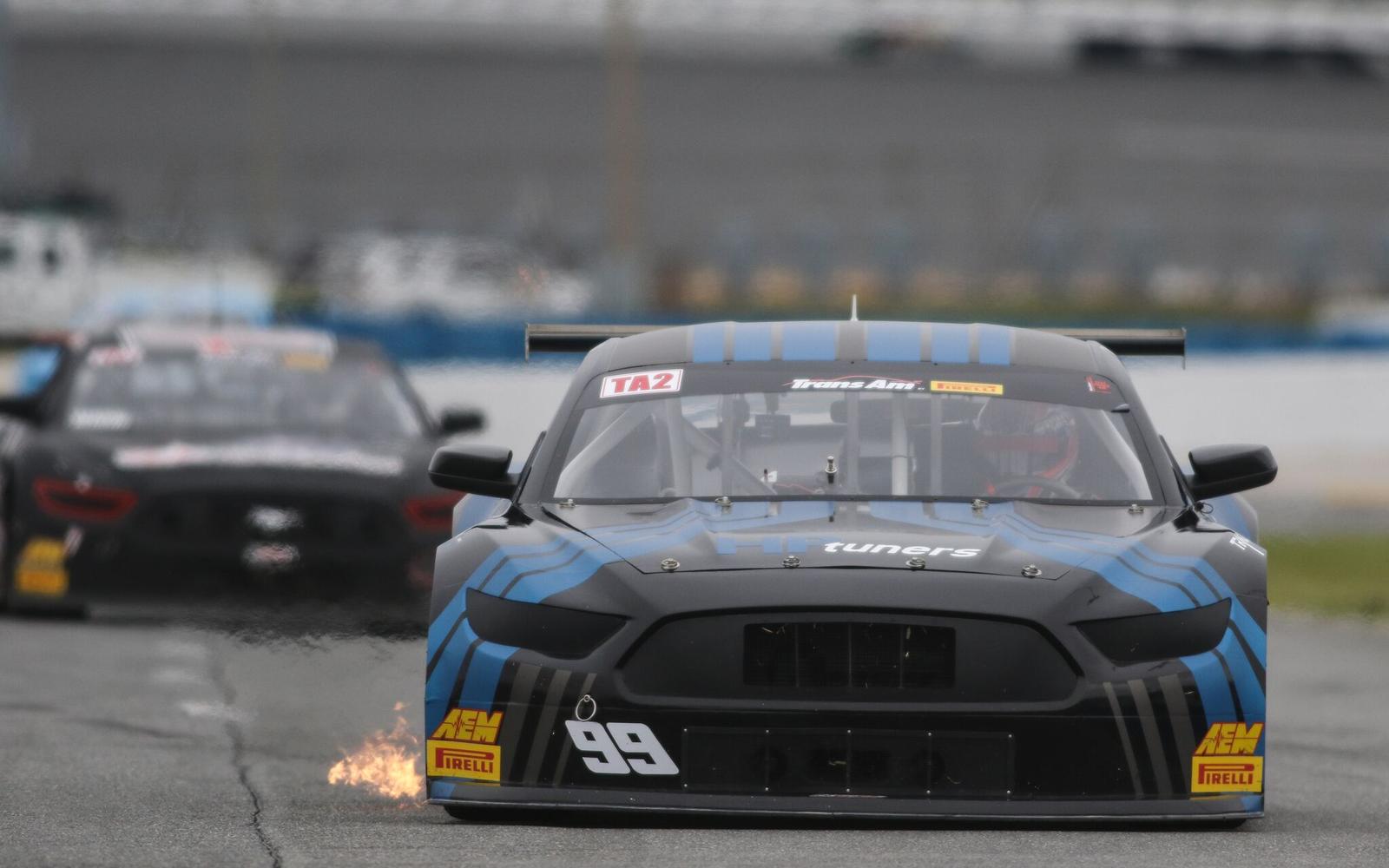 DAYTONA BEACH, Fla. (16 November, 2019) — The Trans Am Series presented by Pirelli TA2® class season finale at Daytona International Speedway was dramatic from start to finish in the 65-minute finale on Saturday.

“The last few laps were pretty busy, pretty aggressive, but fair – fair both ways,” said Merrill of his battle with pole sitter Sam Mayer. “Our car was very good, and I felt his car was very good, so it was a very good race for the lead there at the end. The Big Diehl Racing/Mike Cope Race Cars crew was unbelievable. They gave me the best car in the field. It was my job to bring it home in first place.”

Sixteen-year-old NASCAR K&N champion Mayer (No. 92 SLR/Fields Racing/M1 Racecars Chevrolet Camaro) started on pole, but it was Merrill that shot to the front of the pack at the start ahead of Rafa Matos and 2019 TA2® champion elect Mark Miller. Tony Buffomante slotted in to third as Mayer looked to move up from fourth.

Under braking for turn one, Mayer and Buffomante made contact, sending the No. 34 Mustang back down the order to 24th position. Mayer was issued a drive through penalty and fell back to eighth.

Merrill built a seven-second lead before debris on the track forced the first of four caution periods and grouped the field back up. Miller and Jacob Mosler (No. 17 SLR/Fields Racing/M1Racecars / Chevrolet Camaro) fell victim to the flying wreckage. Miller pitted to change two flat tires and continued the race. Mosler wasn’t as lucky. His day ended with pierced transmission.

On the restart, Merrill held off the challenging 2018 TA2® champion Rafa Matos for the lead. Again building his lead, Merrill’s gap was erased once again after another full course yellow following an issue that ended Matos’ strong run. 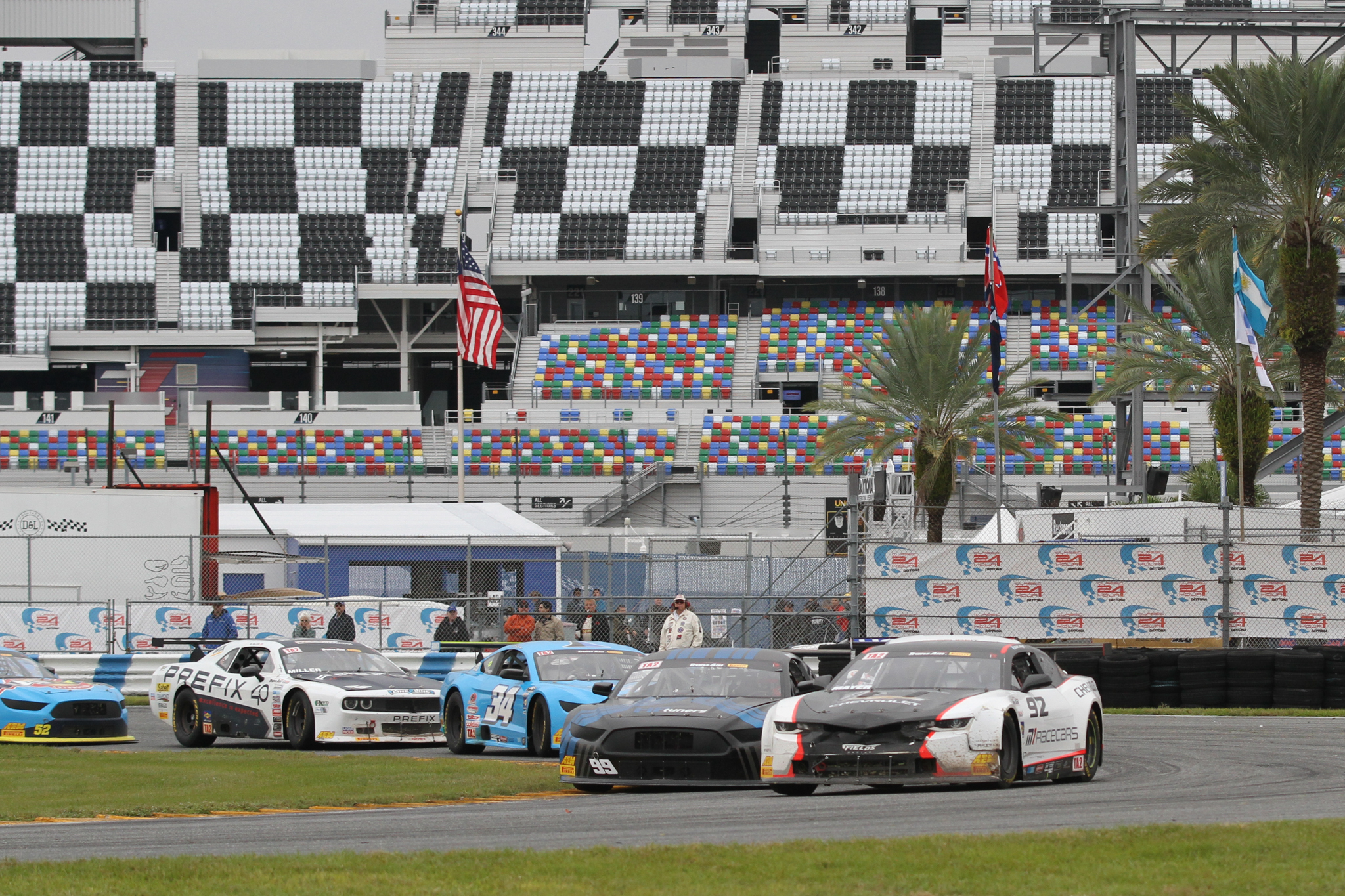 After a pair of back-to-back cautions, Mayer caught Merrill following a late restart and the two swapped the lead several times. Mayer made his final bid entering the NASCAR oval on the 26th lap, but a two-car incident on the front straight brought about a race-ending caution as Merrill closed out his 2019 season on a high note. Following post-race inspections, Mayer’s entry was found to be out of compliance and was disqualified from the race.

Buffomante also had a strong drive through the field following the early incident, taking third on the final green-flag lap, and later promoted to second. The run was Buffomante’s Trans Am swan song, as the five-year veteran driver will step away from competition as he prepares to pass the torch to his 11-year-old son who is continuing the family tradition and pursuing a racing career.

“He [Mayer] just drove right through us,” Buffomante explained. “At a track like Daytona, a drive-through penalty is not big enough, especially when you get a caution, those guys just drive right back up there. It’s unfortunate for us. We had a good car, and spent a bunch of time backwards after I spun out. Then I had to work back through the pack. I would have liked to have had the last couple of laps not run under the caution. I think we would have made it interesting. We were hoping for another win here, but it is great to end up here on the podium. ”

Lawless Alan (No. 52 AutoParkIT / Ford Mustang), the 19-year-old TA2 Rookie of the Year, finished fourth after an early pit due to loose wiring forced him to the pits early in the race and Misha Goikhberg (No. 10 BC Race Cars / Chevrolet Camaro) took fifth.

Miller, after hitting debris, ran fifth before retiring late in the race due to a coolant leak.

“This was not the way we wanted to end the season,” said a deflated Miller. “Our car was very, very good. We had contact at the beginning of the race that put us back. Then we were able to put on a good showing. I had a good car until I found myself driving in my own antifreeze. I thought it might have been a tire, but then I saw the temperature gauge. I got hit a few times, but it was fun.”

The showing at Daytona International Speedway closed out the 53rd Trans Am Series season.

Fans can keep up with the Trans Am Series presented by Pirelli throughout the offseason at www.gotransam.com, on Facebook at www.facebook.com/gotransam and on Twitter at @gotransam.