Lawrence Loshak on Pole for Road America Trans Am

“I think I’m still sleeping,” said Loshak.  “It’s a dream come true to be able to race one of these cars in front of my friends and family here. It’s been a crazy season with highs and lows.  We had some motor issues yesterday, and the team put their heads down and gave me an incredible car.  I’m happy, but we’ve got a hundred-mile race tomorrow; and the guys behind me aren’t going to make it easy.  Tomorrow’s the big show and that’s what it’s all about. “

Loshak would capture pole with a 2:04.587 lap around the 4.028-mile Road America circuit, well over a second faster than the second fastest qualifier.  Entering the weekend, Loshak sat second in the TA class points following a string of strong results from behind the wheel of the No. 2 Pennzoil/ ETE/ GoShare Chevrolet Camaro—including his first career TA class victory at Pittsburgh International Race Complex.

“It takes more than just a good driver,” said Loshak. “I work on that as much as I can, but you need a good car and a good team.  Burtin Racing and Claudio Burtin have given me an incredible opportunity.  I was ready to go back to club racing, and Gary Selix [Burtin Racing Crew Chief] called and gave me an opportunity to race at Circuit of The America’s last year.  How can you turn down the chance to race a TA car?  And here we are.   We’re on fire now—clawing our way back into the championship.  I think it’ll be an exciting next five races.”

Loshak will be joined on the front row of the TA class by Chris Dyson, in the No. 20 Plaid Enterprises/ CD Racing Ford Mustang, who turned a 2:06.077, and following qualifying sits six points behind Loshak and the No. 2, third in the championship standings.

Boris Said, in the No. 21 Monster Energy/ Weaver Concepts Dodge Challenger, will start on the inside of the front row after a 2:06.242 lap, in pursuit of a repeat of his 2002 Road America Trans Am victory.  The TA class qualifying top five was completed by Appleton, Wisconsin, resident Cliff Ebben, in the No. 36 Stumpf Ford/ McMahon Group Ford Mustang, and David Pintaric, in the No. 47 Kryderacing Cadillac CTS-V, with times of 2:07.380 and 2:07.481, respectively.

Current points leader and defending TA class champion, Ernie Francis, Jr., would qualify 16th in the No. 91 Frameless Shower Doors Chevrolet Camaro; a backup car lent to the Breathless Pro Racing team following damage to Francis’ No. 98 in Friday’s practice session.  The champion will aim for a modest finish tomorrow in an attempt to salvage points. 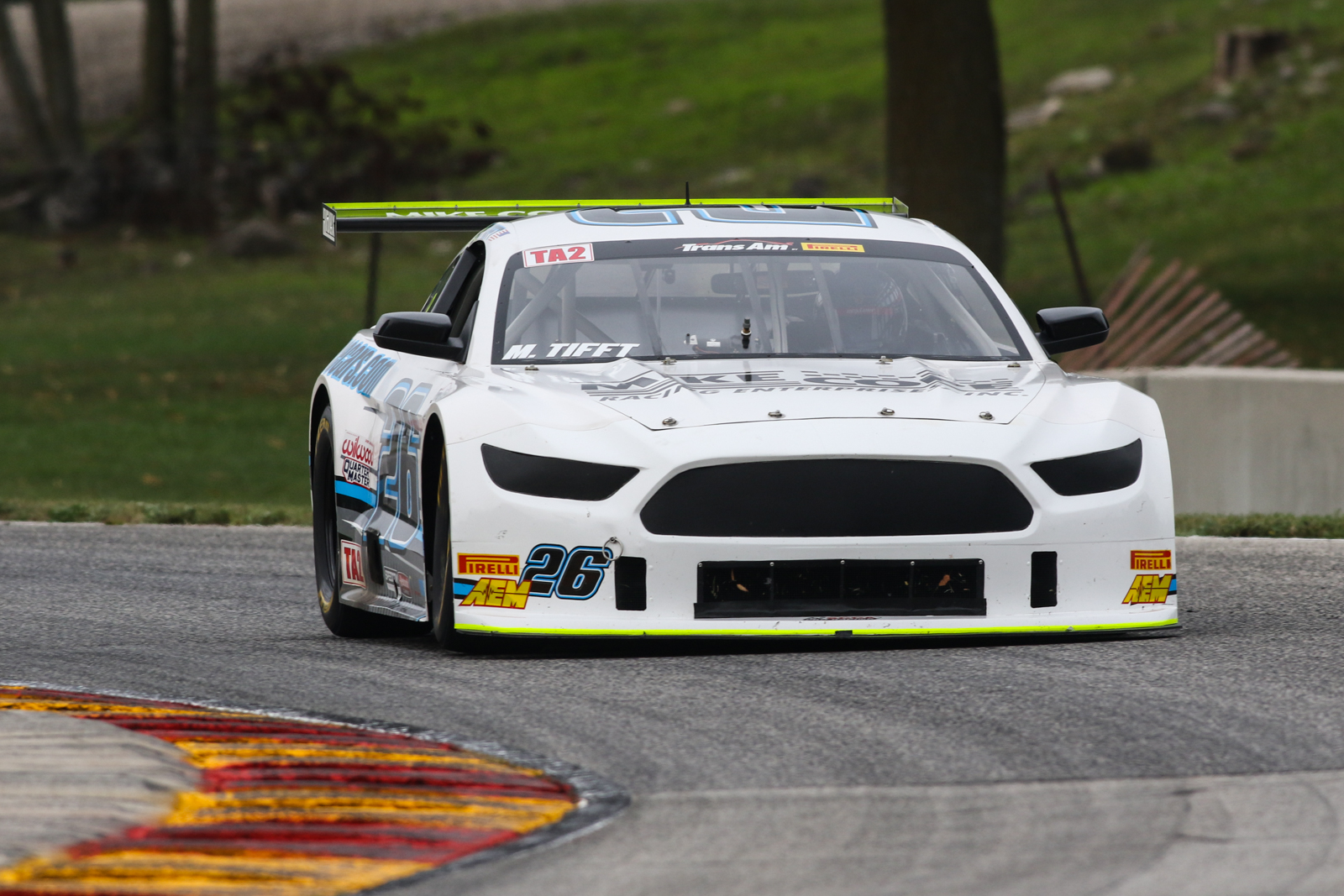 Tifft is one of several Xfinity drivers taking to the TA2 class in search of road course experience this weekend— taking advantage of the opportunity for his first career Trans Am and TA2 class pole for Mike Cope Racing Enterprises, the team’s second of the year.   Tifft’s fast lap, set on his fourth of the session, was nearly half a second faster than the previous qualifying track record set by Rafa Matos last year, a 2:13.627.

Matos, now the championship points leader, will start alongside Tifft tomorrow in the No. 88 3-Dimensional Services Group Chevrolet Camaro after a 2:13.226 lap of his own in pursuit of his fifth win of the 2018 season.

Tony Buffomante, in the No. 34 Mike Cope Racing Ford Mustang, qualified just behind Matos with a time of 2:13.378 for third starting position, setting up another battle between the two championship challengers.   Buffomante has finished on the Road America TA2 podium for two consecutive years, with a second place finish in 2017 and a pivotal victory in the 2016 championship season. 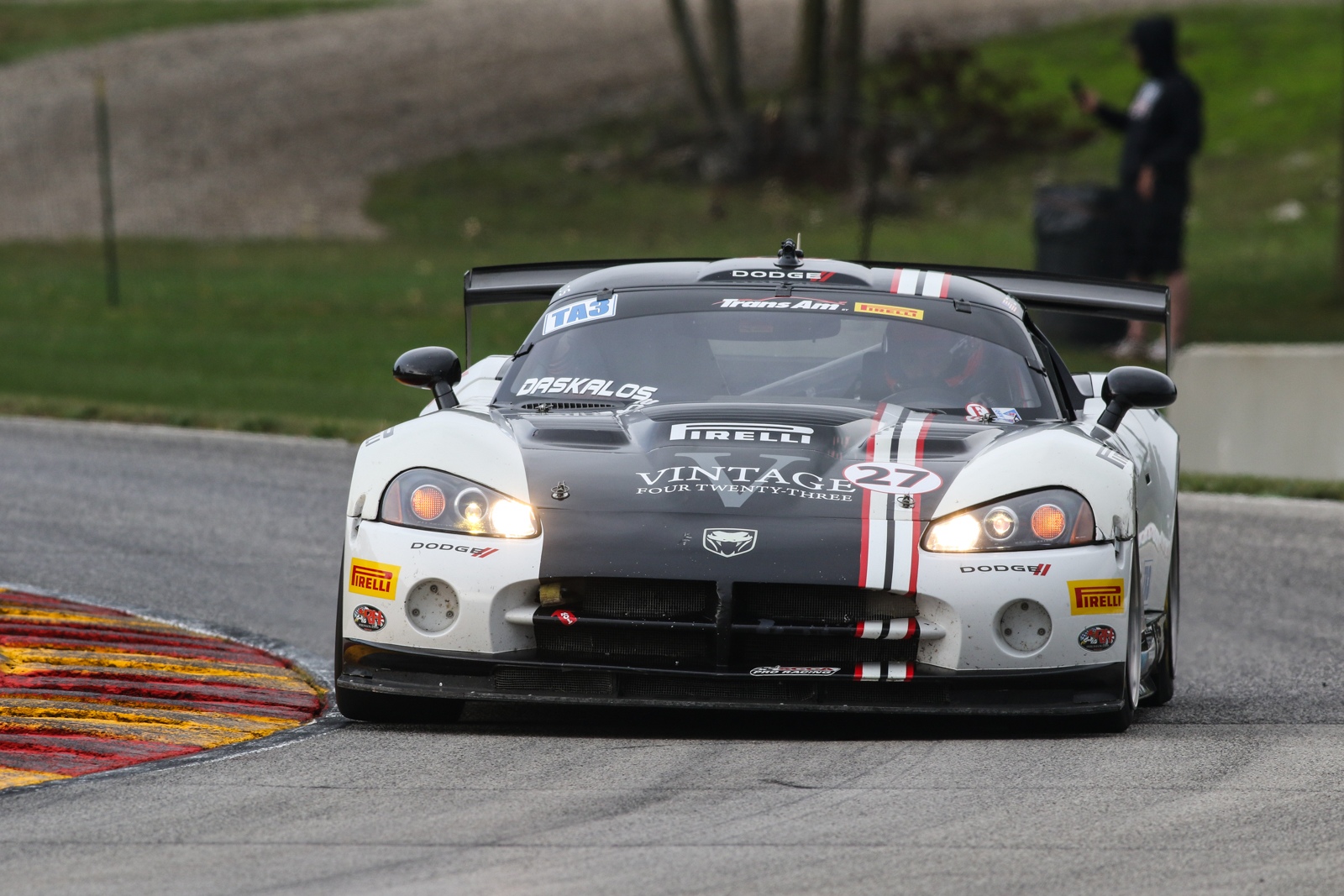 Racing alongside the TA class in tomorrow’s multi-class Ryan Companies Road America Classic will be the TA3 class with Jason Daskalos and the No. 27 Daskalos Racing Dodge Viper, on pole for the second consecutive year.

Daskalos would pace the field with a 2:15.822, putting him in prime position to capture his third career Trans Am victory and repeat his Road America win from a year ago.   Starting alongside Daskalos in the all-Dodge front row will be Cindi Lux, in the No. 45 Lux Performance Dodge Viper, who logged a 2:17.606 qualifying effort.

Mid-Ohio podium finisher Marko Radisic, in the No. 222 Precision Driving BMW M4, turned a 2:18.342 and will be tasked with chasing down the V10-Vipers; Brian Kleeman, in the No. 07 DWW Motorsports/ Racetech Ford Mustang FP350s, will start alongside Radisic after a 2:18.591 effort.

Warren Dexter, the TA4 class’ sole representative, qualified with a 2:20.709 lap and will race alongside TA3 in the No. 61 Joe’s Hand Cleaner/ Dexter Racing Ginetta G55.

Both the Ryan Companies Road America Classic and Muscle Car Challenge will run for a total of 101.2 miles, 25 laps around the Road America course and will be live streamed on Motor Trend On Demand, while the weekend will be showcased on CBS Sports network on a one-hour highlights show on tape-delay.

Trans Am is joined on the weekend by NASCAR Xfinity holding the Johnsonville 180 and the Speed Energy Stadium Super Tracks.