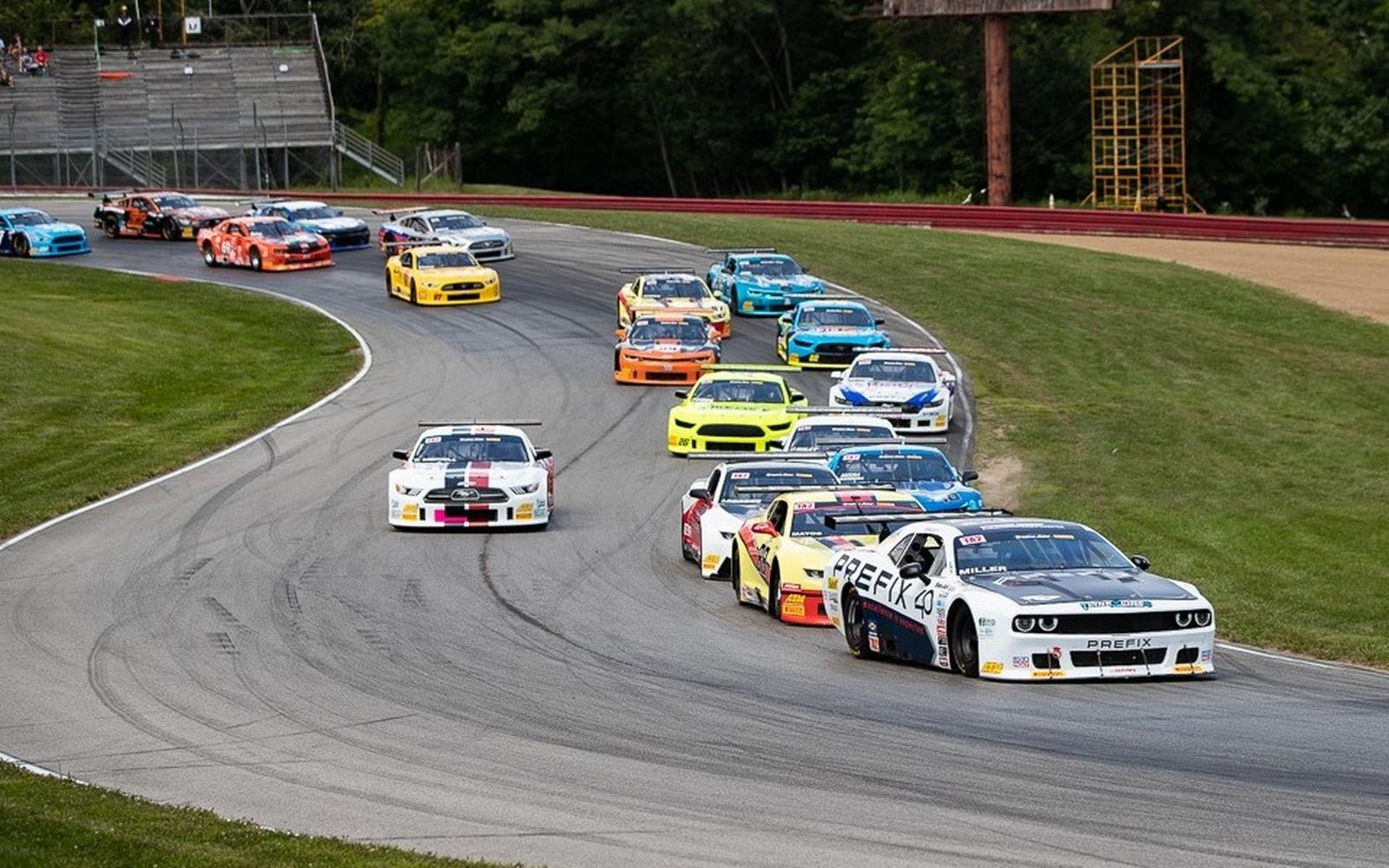 In nine races this far this season, the TA2 category of the Trans Am Series Presented by Pirelli has had five different winners. Five different drivers have started on pole and nine drivers have stood on the podium. It’s gained a reputation as a series where a good driver can win on any given day, and that comes down to parity. There is not a lot to be gained in the development department, which keeps things pretty equal and cost-effective.

But TA2 is not a spec series. Instead, the costs are tightly controlled in the areas of engines, bodies, chassis and shocks. And, of course, everyone is on the same Pirelli tires. Controlled costs, without runaway development, leads to parity. And parity leads to close racing.

“[TA2] is probably the lowest cost for the best performance level anywhere in sports car racing,” says current points leader Marc Miller, who has raced a wide variety of sports cars and his currently racing the Prefix Dodge Challenger. “It’s a really good cost-contained package and I think that helps draw a lot of people into it. More racers tends to make the competition better, closer and more fair. Usually if you have like 10 cars, there’s one or two cars that are checking out, disappearing, and it leaves everybody to fend for themselves, This series, with so many cars, you have to kind of always be working at it.”

There is room for development, and options in the cars. There’s a choice of brand — Ford Mustang, Dodge Challenger or Chevrolet Camaro, and racers can use the corresponding engine from the manufacturer or the new Choice engine from Prefix.

“We work pretty hard to get parity between the three different makes and models,” explains Ricky Brooks, technical manager for the series. “That gets a little tricky because you’ve got three different combinations. We’ve got the new motor, the Choice motor, coming out. Eventually everybody will be running that motor, but it could be years down the road. We’ve got parity between the three makes and models, and the Choice, so there’s no advantage or disadvantage running the Choice motor or any other motor package. We’re down to one body package with the three different makes and we’re going to continue down that road.”

Despite technical variety, Trans Am is able to keep a competitively balanced field.

Brooks comes from the world of short track oval racing, where there are a legion of chassis builders. The fact that TA2 has only three – and most teams are running either of two – makes policing things much easier, and the chassis builders can’t make any changes without the series’ approval. For the other components, brakes and shocks, there are cost caps in place. That can get a little trickier, but Brooks has a pretty good system in place.

“We’ve got pretty much every shock that anybody’s running; we’ve got a parts list of what it should be and what it shouldn’t be. We can do the visual inspection on the outside and if we have any doubts we can pull them apart and make sure the pistons and everything that’s inside the shock is supposed to be in the shock for that cost point. If it’s different, and it drives the cost above what it’s supposed to be, then it’s wrong,” he says.

Racers can custom valve the shocks using shim stacks, but high-dollar quadruple-adjustable shocks are out. The next area the series might take a look at is transmissions, but for the most part Brooks says things are under control. And it shows in the prices of TA2 cars, which can also be competitively raced in SCCA GT-2: complete new cars can be had for around $120,000; used cars with spares usually range from $70,000 to $100,000. That’s a lot of race car for the money, especially when a team or driver won’t have to pour a bunch more money into it to be competitive in a pro series.

“The cars are so similar and you have to drive them in a certain way, so it really teaches good habits,” says Marc Miller. “If you’re an amateur driver, it forces you to do the right things.”

“You’re still allowed to develop the cars, which is nice, because drivers who have a good engineering background can really make the cars better,” says Miller. “But the cars are so similar and you have to drive them in a certain way, so it really teaches good habits. If you’re an amateur driver, it forces you to do the right things in a car — the same sorts of things you’d do if you went GT3 or GT4 racing, but there you have all those aids like ABS and traction control to get away with little mistakes. A TA2 car gives you immediate feedback that that’s not what you’re supposed to be doing!”

The Trans Am Series and TA2 resume racing this weekend at Watkins Glen International. TA2 has a healthy 28-car entry, showing that the class is definitely working and attracting drivers.