Watkins Glen, N.Y. [September 8, 2018] – Scott Lagasse, Jr., will start tomorrow’s Watkins Glen Muscle Car Challenge from pole in the No. 95 SLR/Fields Racing/ M1 Fastrack Chassis Chevrolet Camaro, his career first in the Trans Am Series presented by Pirelli’s TA2 class.  Starting alongside Lagasse, Jr., at the head of the 22-car field will be Louis-Philippe Montour, also the best starting position of his respective TA2 career.

While well versed in the ranks of stock car and dirt racing, Lagasse is making a new name for himself in the Trans Am Series’ road racing ranks, dedicated to learning a new trade in the world of lefts and rights.  Today his hard work was showcased in a 1:51.225 lap, a new TA2 class qualifying track record on the 3.4-mile Grand Prix course.  With pace in hand, Lagasse is now focused on a mistake-free race tomorrow in hopes of bringing home what has proven to be an elusive TA2 win.

“We’ve got a great race car,” said Lagasse.  “We’ve got a good group of guys working hard; it’s just going to be me not making mistakes.  I’m learning every weekend and getting better at that. This is just different for me, I’m learning.  The more I do it, the more consistent I get, the less mistakes I make.”

The pole is not the first sign of success in TA2 for Lagasse: he and the No. 95 have come into their own over the past three events with three consecutive podium finishes, including a second place at Indianapolis Motor Speedway.  He credits his success, in part, to the instructions of his father, Scott Lagasse, Sr., a constant presence under the SLR team tent.

“I’ve got a good teacher,” said Lagasse, Jr. “It’s pretty cool when your dad is sitting there and he’s won at all these places and has all kinds of records. You can go out there and come back and share with him your thoughts, why you did what you did, why you’re doing things a little bit different.  I’m adapting dirt world and oval track world to road racing.  Between my dad, Dorsey Schroeder and Terry Earwood, I’m learning.  This series gives you all the tools to be good. Those guys, I just wear them out. I wear out Terry and Dorsey after every practice. ‘What did you see, where can I be better?’  Look at the championships they’ve got, why wouldn’t you lean on them?”

Lagasse’s No. 95 is also the only M1 Fastrack chassis currently running in the TA2 paddock; and while the SLR team is running without the benefit of multiple cars, progress on developing the chassis is going well.

“Development is going well,” said Lagasse.  “But I want teammates.  It’s hard at times because we have to guess, and I have to guess— I don’t have a ton of experience to tell them what to do.  The cool thing is it responds to the changes really well; we can make little tweaks and I feel them immediately on the racetrack.  It allows us to run one lap at practice, come in and make a change, go again, and then do the same thing over and over.  So I think it’s speeding our learning curve up, just because it’s responding to those changes, like it should!”

Louis-Philippe Montour’s qualifying time in the No. 13 Montour Ltd Chevrolet Camaro was a 1:51.461, strong enough to beat out current TA2 points leader Rafa Matos, in the No. 88 3-Dimensional Services Group Chevrolet Camaro, for a spot on the front row.  Still, Matos’ 1:51.587 will see him start on the inside of the second row, solid position to defend his 33-point lead over current runner-up Tony Buffomante.

Ethan Wilson, in the No. 49 Berryman/ Prefix Dodge Challenger, continued the trend of career best qualifying performances with a 1:52.037 lap and will start fourth.  Tony Buffomante, in the No. 26 Mike Cope Racing Ford Mustang, will start fifth after a 1:52.043 effort of his own.

The Watkins Glen Muscle Car Challenge will be held at 11:10 AM EDT tomorrow, Sunday September 9, and will run for a total of 102 miles, 30 laps around the 11-turn, 3.4-mile Watkins Glen Grand Prix circuit and will constitute Round 9 of the 2018 Trans Am TA2 Championship. 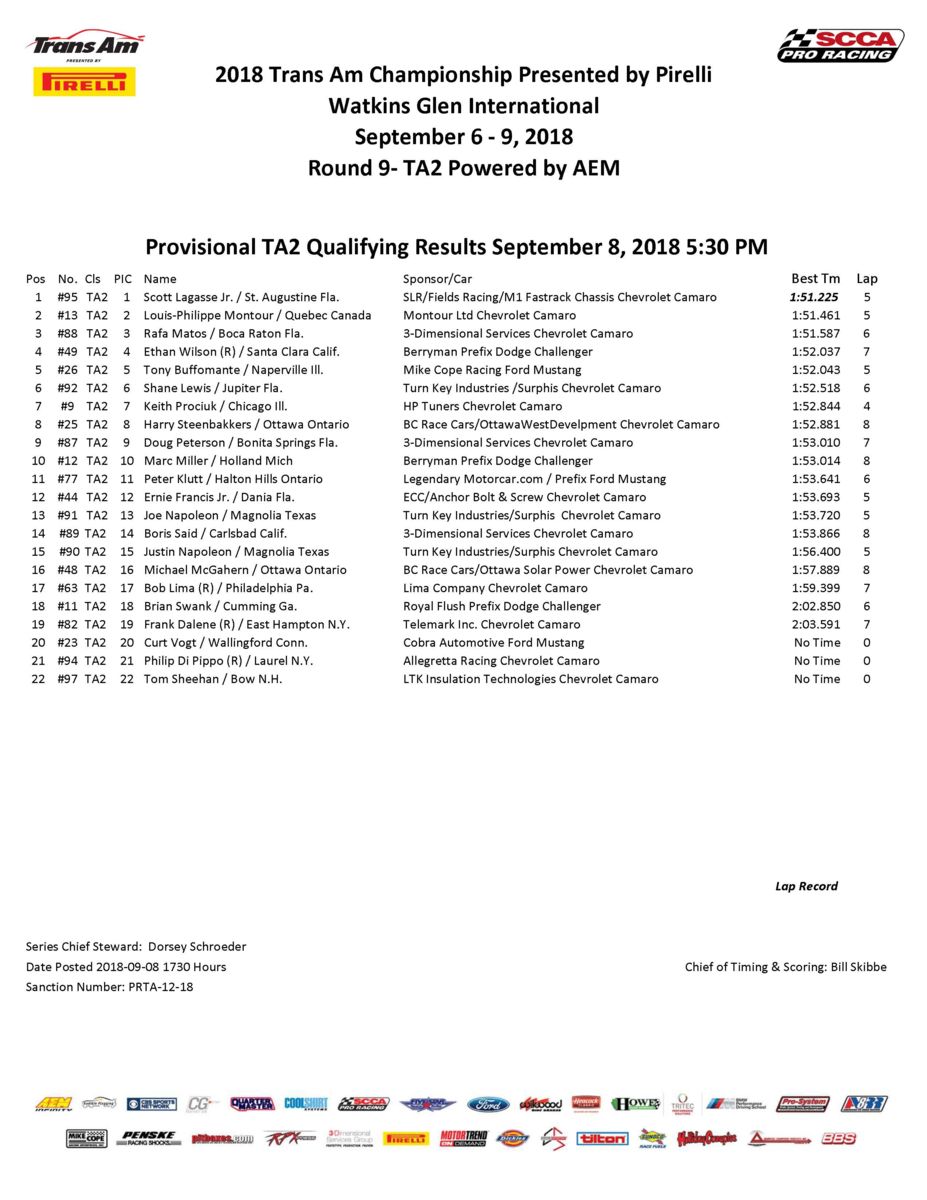