Dyson Dominates Trans Am at the Brickyard 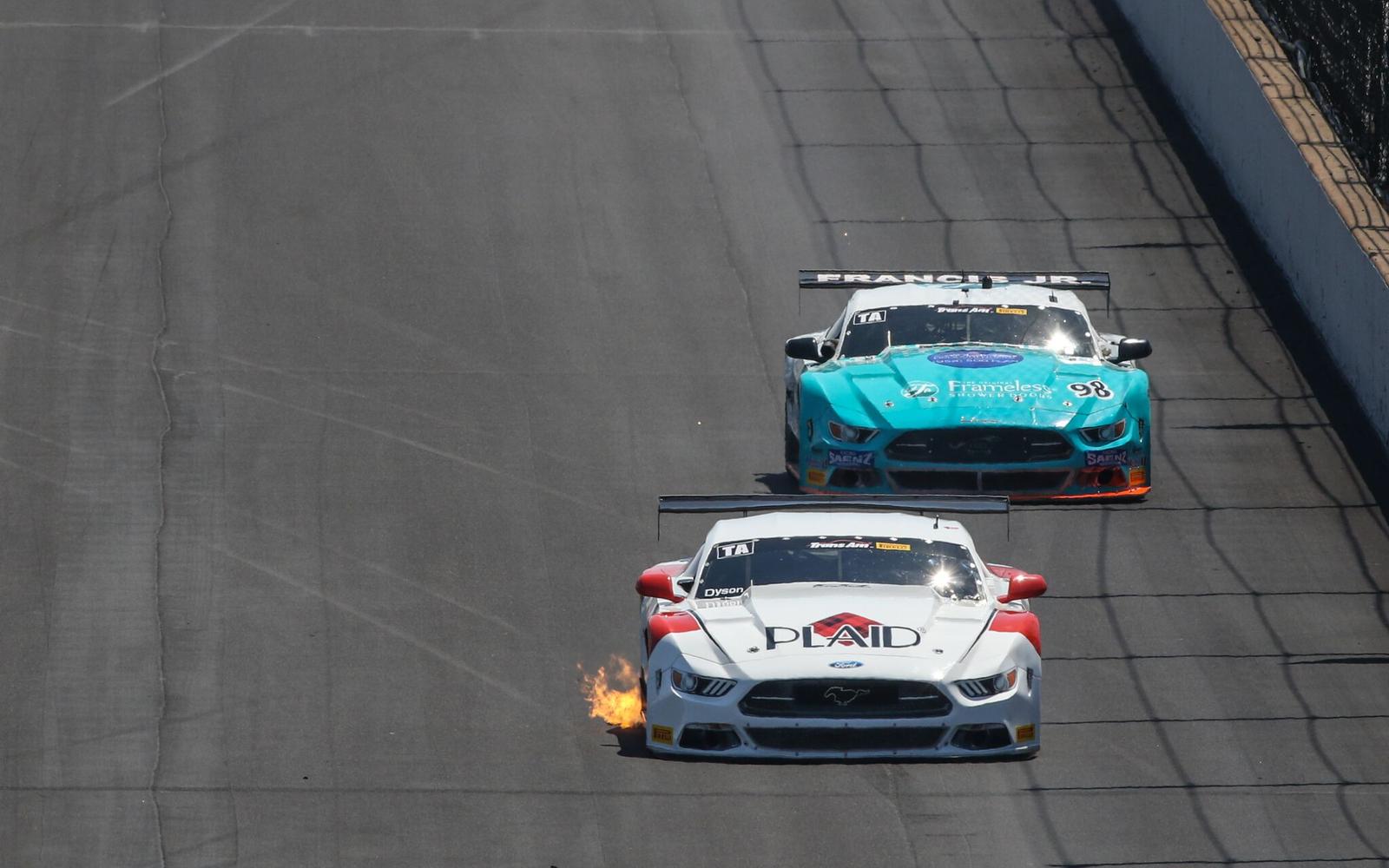 INDIANAPOLIS, Ind. (3 August, 2019)- After a long summer break, the Trans Am Series presented by Pirelli was back in action at the iconic Indianapolis Motor Speedway this weekend. The Trans Am, SuperGT and GT class drivers delivered an action-packed start to the multi-class 42-lap race at the Brickyard on Saturday afternoon.

The race opened with drama up front between pole sitter Ernie Francis Jr. and Chris Dyson, and ended quietly with Dyson dominating to take his second consecutive victory in the TA class by more than 23 seconds over two-time Indianapolis winner Francis Jr., with Adam Andretti taking third in the No. 86 Engineered Components Co/Anchor Bolt Chevrolet Corvette after running out of gas literally as he crossed the yard of bricks.

After suffering engine problems and a transmission failure, Dyson’s No. 40 Plaid Ford Mustang showed no ill-effects from the issues that slowed him earlier in the weekend.

“Any time you can come away with a win in Indy is special, this place is bigger than all of us,” said Dyson. “I think about all the history here, it’s a special day for us. I couldn’t be happier for the guys. We were beneficiary of good fortune and we just motored along. The Pirelli tires stayed under me and the EMCO gearbox was great. The crew was head and shoulders above the rest this weekend. This win is for them.”

Fast all weekend in practice and qualifying, Francis Jr. started from pole position in the No. 98 Frameless Shower Doors Ford Mustang with Dyson’s Mustang starting in second. Dyson pressured Francis Jr. at the start, taking the lead just one lap in. However, looking for an Indianapolis dynasty, Francis Jr. didn’t let Dyson off easy as he looked for a way back to the lead. His early efforts went unrewarded at first, but his perseverance paid off, passing for the lead just before a full course yellow was called.

On the restart, Dyson paid back Francis Jr., taking over first and never looking back as the defending champion raced to second place at the finish. 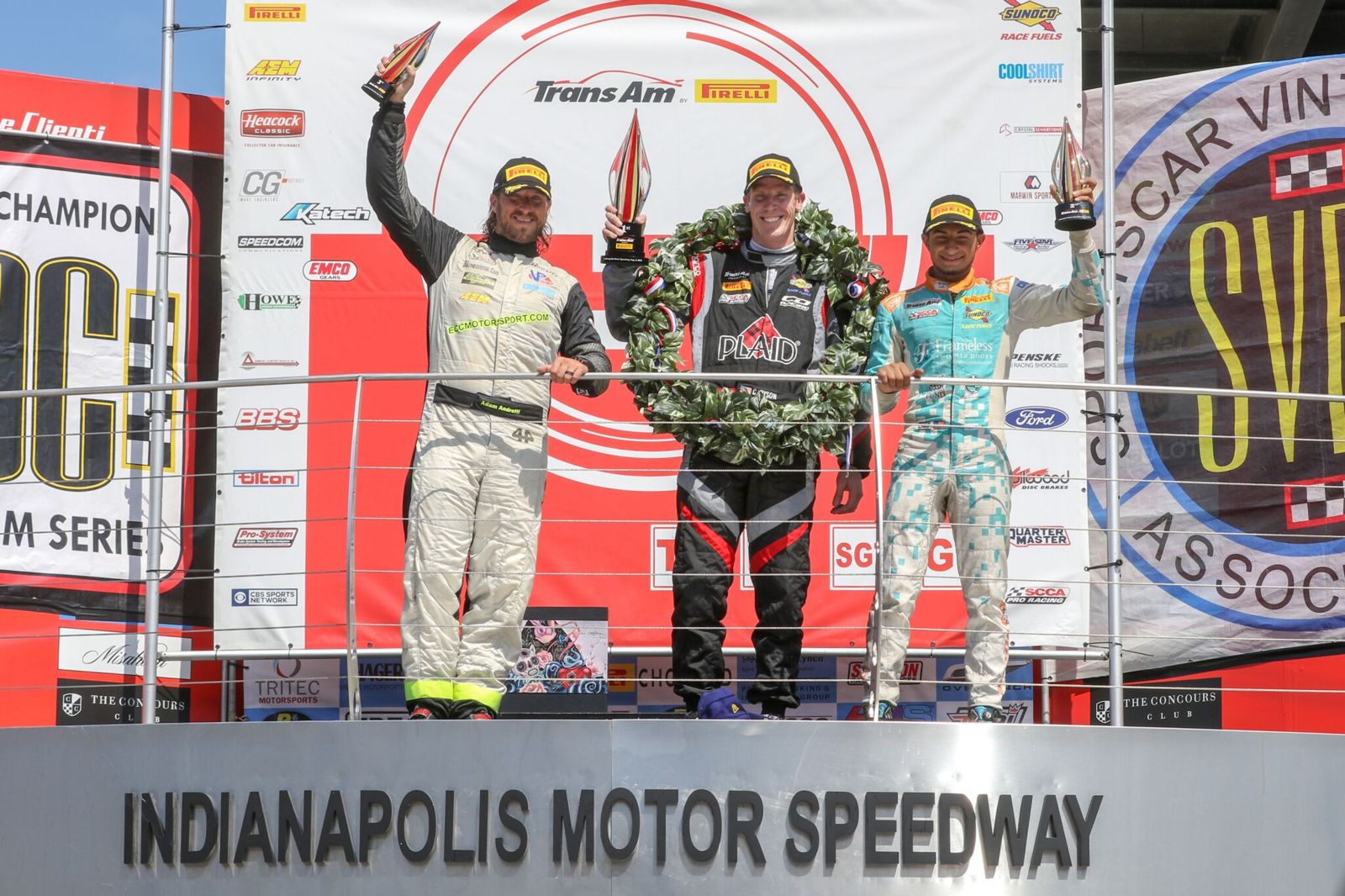 “It was a great race at the beginning battling with Chris up front,” said Francis Jr. “It looked like it was going to be a lot of fun, then I blew a cylinder. We had the pace. The Breathless Racing guys gave me a fast car and I am so appreciative for that. We will come back strong for Mid-Ohio and it should be a great championship battle between Chris and I.”

With a last name synonymous with racing in Indianapolis, Andretti started the race off in Row 2 in third. Returning to Trans Am after a two-year hiatus, Andretti finished third in the ECC Motorsports Chevrolet Corvette powered by the last engine the legendary Chuck Wright built.

“Indianapolis is hallowed ground,” said Andretti in the post-race press conference. “To be here and compete at a high level with these competitors by my side is pretty special. I obviously want to be in Chris’ seat, but that’s what racing is about, only one person get’s to sit in first. We traditionally race the No. 44, but we raced the No. 86 this weekend. This year marks 25 years since we lost my friend Adam Preach to leukemia. We wanted to honor his legacy by running his old peewee football number 86.”

The SGT class race saw Tim Kezman go from flag to flag to claim the checkered flag with the No. 44 Lemons of Love Porsche 991 GT3 Cup car.  In his Trans Am SGT debut, Ken Thwaits drove the No. 35 Showtime Motorsports Audi R8 to a second-place finish while Mark Boden wheeled his No. 46 Beverage Flavors International  Porsche 991 GT3 Cup from a last-place start to finish on the podium in third.

“The race was good and it was good to be back racing with Trans Am,” said Kezman “It’s two in a row for us here in Indy. I love this place! It was tough conditions, but my team gave me the keys to unleash it here.” 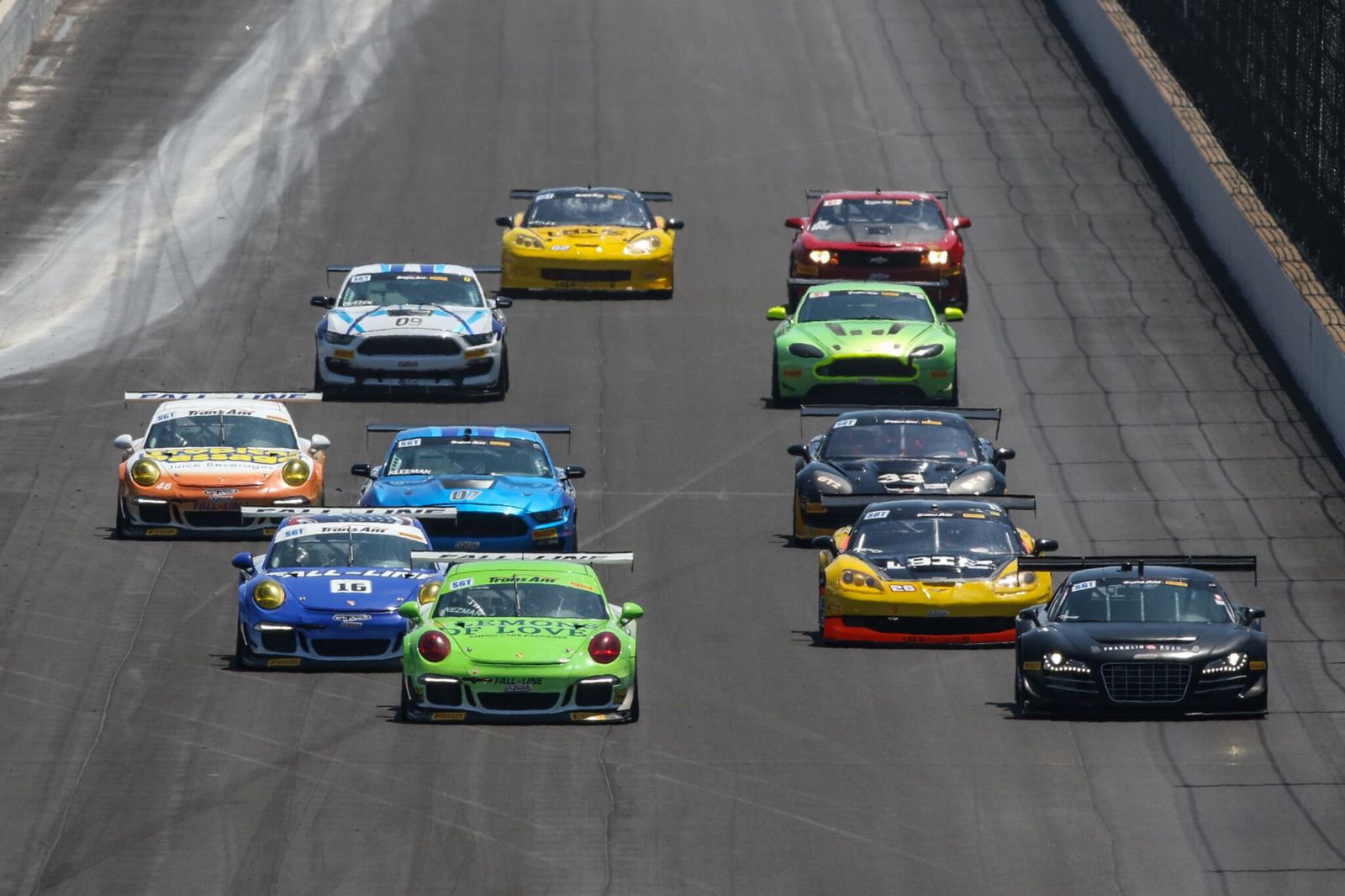 Two drivers represented the GT class on the podium with Steven Davison taking first in the No. 22 Davinci Plastic Surgery Aston Martin Vantage and Joe Bogetich in the No. 65 Westover Controls Chevrolet Camaro SS in second.

“I appreciate the opportunity to race here at Indy,” Davison said. “It was a clean race and a well-orchestrated event by Trans Am Series. We persevered through mechanical issues and I’m really glad to be up here.”

A seventh-place finish earned Kerry Hitt in the No. 19 Advanced Composite Products Inc Cadillac CTSV first in the Trans Am Masters Group.

“The race was great,” Hitt said on the podium. “The guys did a heck of a job on the car. I’m honored to carry the torch for us old guys. My friend Bobby took his checkered flag on life last week. He wanted to come see me race at the legendary IMS, so Bobby, this one’s for you.”

Recovering to a fourth-place finish from a spin that knocked her down to last, Amy Ruman in the No. 23 McNichols Co. Chevrolet Corvette received the Cool Shirts Cool Move of the Race.

“I got on the car a little hard coming out of the back straight, did the laziest spins,” said Ruman. “But then we started clicking away there at the end, battling back from dead last and managing to work our to fourth. We kind of had one of those weekends too where we fought everything. The guys changed a motor last night, a transmission this morning and the nose I messed up in qualifying. The crew worked really hard to get me here today.”

The TA/SGT/GT drivers and teams have a quick turn around for the next event, traveling to Mid-Ohio Sports Car Course to support NASCAR Xfinity series Aug. 8-10.