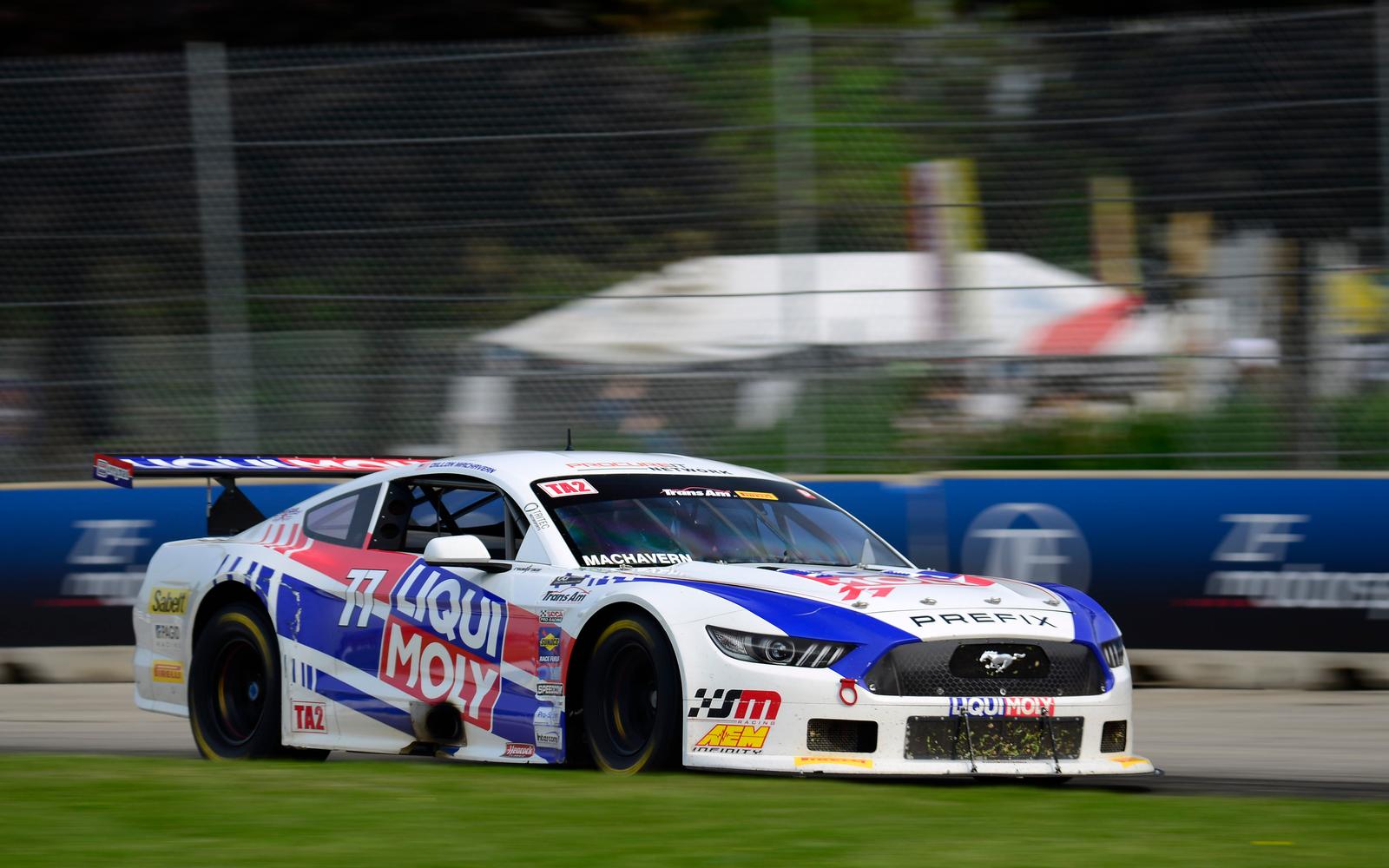 Columbia City, Ind.–This past weekend The Trans Am Presented by Pirelli made its annual pilgrimage to Motor City for the annual TA2 Dual in Detroit. With two races on tap there were twice as many points available and twice the opportunity for success and failure on the tight and bumpy Belle Isle circuit.

“It was an exciting weekend for us,” Stevens-Miller Racing’s (SMR) Owner Joe Stevens said. “We brought five of the 17 cars entered with our crew focused on keeping on top of the cars to ensure reliability. The tight confines and the bumpy nature of the Belle Isle circuit make mistakes and mechanical issues common and costly, something we had to avoid to put our drivers on the podium.

“Our team did a fantastic job and coming away from Detroit with both first and second in the championship standings is fantastic.”

Dillon Machavern in the Liqui Moly, PREFIX-powered Mustang put together a pair of podium finishes with a third on Saturday and second on Sunday that moved him into second in the championship standings.

Championship leader Marc Miller in the SMR, PREFIX 40th anniversary Dodge Challenger did not fare as well, but his closest competitor in the championship did not finish either race opening the door for Dillon.

Stevens continued, “Marc had a strong fourth place finish on Saturday, but Sunday started with a nudge in turn three on the opening lap that spun him. After getting going Marc worked his way back to fifth but mechanical failure caused a crash in the same corner ending his day 22 laps later.

“Dillon had a fantastic 10 days with three podiums in three races. Our Liqui Moly, PREFIX-powered Mustang has really come around.”

After a strong third on Saturday, Dillon was leading on Sunday until he came upon lapped traffic that dropped him to third. Contact between the two leaders moved him back to second with the race ending under yellow. “We all thought we were going to come home with the win – but Detroit is a dual with the devil in so many ways. One misstep or catching traffic at the wrong spot and you can drop like a rock,” Stevens said. “This event is one of our biggest of the year with tens of thousands of spectators as well as being the home of our sponsor and technical partner, PREFIX. We also had Liqui Moly representatives, as well as Beau Blankenship of Berryman Products on hand. Our hospitality tent was as busy as our pit and it was great to see so many come out and support SMR and TA2.”

Stevens continued, “We also had Alex Wright in our No. 83 Dodge Challenger, Brian Swank in our Berryman Products, Liqui Moly, PREFIX-powered Camaro, and Detroit native Jordan Dick in our No. 19 SMR Face in the Race, Dodge. In Sunday’s race Alex and Brian both brought home top 10 finishes running clean to the finish and were ecstatic with their results.

“My guys gave 100 percent to keep everyone on track and it was tough with all three having issues Saturday. Alex and Jordan both bent axles over the bumps and Brian lost a belt. Jordan’s issues were more than appeared and cost him his start on Sunday. Things happen and in these conditions parts can fail. We are so proud of how our drivers take this in stride and continue to support our team. Jordan, Marc, and Brian all had mechanical issues that ended their day but they all handled it like pros. I’m very grateful to have such a fine group of drivers and mechanics. We’re all looking forward to a nice break in the season before we head to Indianapolis, Mid Ohio, and Road America in August.”

About Stevens-Miller Racing
Stevens-Miller Racing (SMR) over its history has one of the highest winning percentages in Trans Am’s TA2 category. SMR’s staff has earned 25+ podiums, two championships, multiple Hard Charger Awards, Rookie of the Year, and more. The team’s focus is achieving the driver’s desired goals. Whether that’d be just having fun, developing driver skill, or winning championships, SMR does it all and has the winning history to back it up. See www.stevensmillerracing.com for more details.