DETROIT, Mich.  [June 3, 2017] – Ernie Francis, Jr., started on pole and led every lap of the 3-Dimensional Services Motor City 100 as the Trans Am Series presented by Pirelli’s TA class took to the Belle Isle circuit at the Chevrolet Detroit Grand Prix presented by Lear.  Joining Francis in the top three were Vinnie Allegretta, in second, and Simon Gregg, who finished third, as the Trans Am Series celebrated its 21st running in Detroit.

The victory, Francis’ third consecutive of the season from behind the wheel of the No. 98 Breathless Pro Racing/ Beta Tools Ford Mustang, came in dominate fashion with Vinnie Allegretta, in the No. 41 TA Sights & Sounds Chevrolet Corvette, providing the only real threat to Francis’ position, and even then only in the earlier stages of the race; as the lead stretched to over four seconds in portions of the course.  Francis would also set a new track record, a 1:32.612 around the 2.35-mile

“The car, the crew, everything is going great,” said Francis.  “ We knew Vinnie (Allegretta) was going to be fast on the start—with the new start procedure without the acceleration cones, I knew there was a chance he might get past us on the first couple turns.  I wanted to make sure we had a good start to the race; then try to ease our way into a lead and then put our head down and keep turning consistent laps.”

Francis, who transitioned to the TA class this season after a trio of championships in the TA4 class, consistently improved over the course of the weekend— coming into his own from behind the wheel of the No. 98 as he adjusted to wheeling the TA class car around a street course for the first time.

“I had to get used to how wide the car was and just how stiff the chassis was on the Grand Prix course,” said Francis. “It’s a big difference from the production Camaros and Mustangs I’ve run here before.  Once we got settled down and made the adjustments, the car was just on rails from start to end.”

The win continues Francis’ rampant start to the 2016 season, as he continues to take the TA class by storm after victories at Homestead-Miami Speedway, Road Atlanta and now at the Chevrolet Detroit Grand Prix.  At only 19, Francis has plenty of development left in his career, but he has a certain mark in mind in his future in Trans Am.

“I really look up to Tommy Kendall,” said Francis.  “In my opinion, he set the bar for Trans Am; and it’s an effort I want to replicate. I’ve got 26 wins in the Series now, so I’m getting up there, but what he did in Trans Am—he’s the mark you want to reach.” 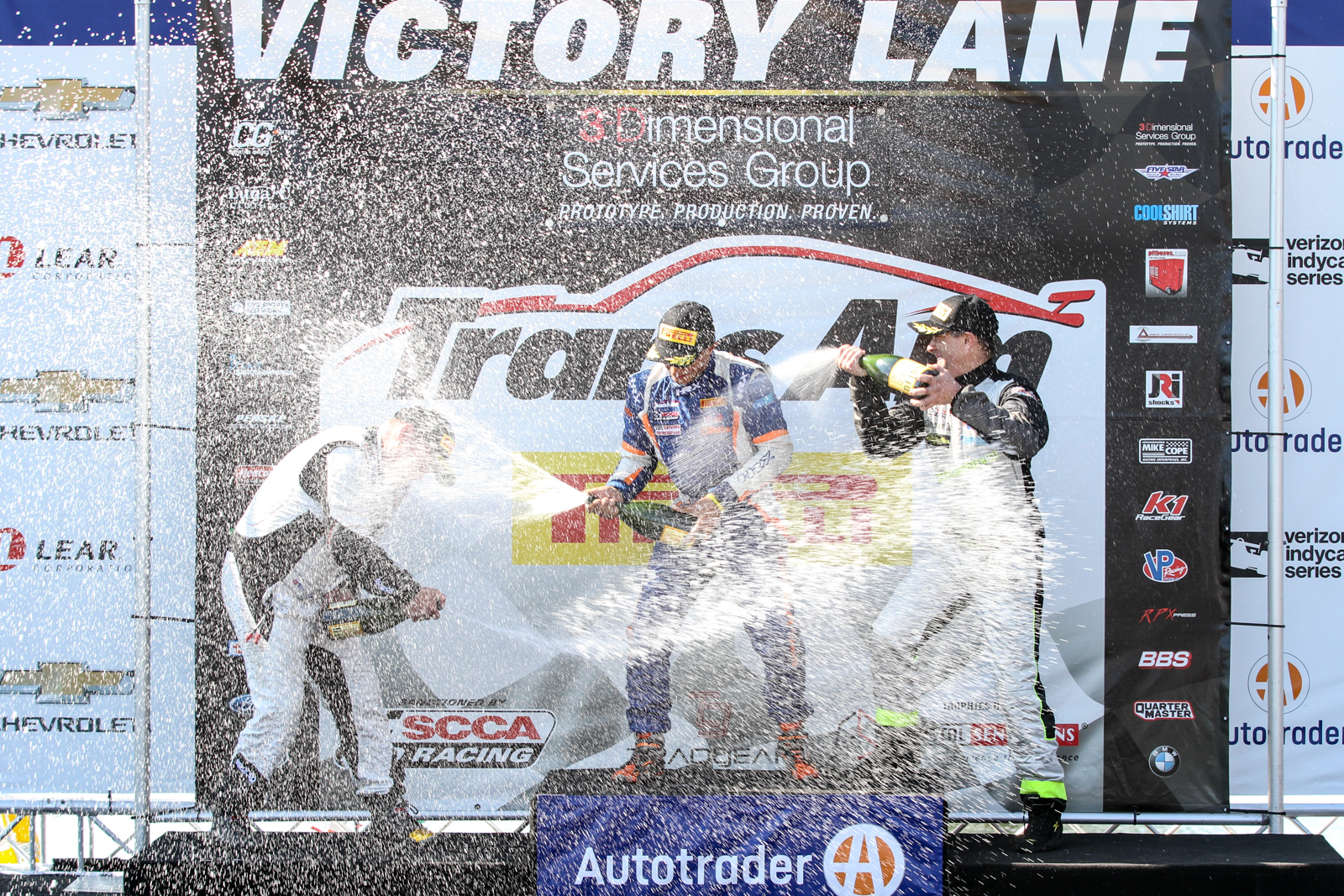 Vinnie Allegretta, in the No. 41 TA Sights & Sounds Chevrolet Corvette, would finish second, holding the position for the entirety of the race en route to his fourth career podium finish in Trans Am on his first-ever race on a street course.

“I was pretty surprised with how well we’ve done,” said Allegretta.  “I took to the track; it fits my style.  I learned a lot from chasing Ernie around as well— he’s very fast on street courses.  The kid is just fast—I didn’t know if I had anything for him, but I wanted to keep him in sight.”

Allegretta, the 2016 TA Rookie of the Year, has continued to learn and develop behind the wheel of the No. 41 as well, changing his style from last year to this year—adopting a more conservative, patient approach.

“I learned a lot last year,” said Allegretta.  “Last year I raced three different cars and was learning a lot of the tracks we visited.  We did pretty well for what we had.  This year, we’re racing in the same car; and I’m getting really comfortable in it—we’re getting the setups down we want.  I think we’ll see a win in me soon.”

AJ Henriksen, in the No. 44 ECC/ Anchor Bolt & Screw Chevrolet Corvette, finished the race in third place but was found to be underweight after technical inspection and was excluded from the race results as a consequence.   The third place finish would then fall to Simon Gregg, in the No. 59 Derhaag Motorsports Chevrolet Corvette, his first top-three finish of the year and 29th of his career.

A resurgent Jeff Hinkle, in the No. 9 GoGoCreate.com Dodge Challenger, would finish fourth marking the conclusion of an up and down weekend for Hinkle, after a hard impact in the first practice session of the weekend put his participation in doubt. However, the American V8 Road Racing crew of the No. 9 worked tirelessly to repair the machine, which would miss the second practice session and qualifying with repairs still underway.

Their reward came in the form of a career best finish for Hinkle, a rookie to the series, and the PitBoxes.com Crew of the Race and the Traq Gear Crew Chief of the Weekend Award to John Debenedictis.

Kerry Hitt, in the No. 19 Advanced Composite Products Inc. Cadillac CTS-V, would finish fifth, his best finish of season.

Amy Ruman, in the No. 23 McNichols Company Chevrolet Corvette, seemed to be on course for podium contention after starting seventh, having sat out qualifying due to mechanical issues.  The crew managed to right the No. 23 in time for the race with Ruman applying pressure on fourth position before mechanical issues returned, ending her race and leaving the No. 23 with an seventh-place finish.

The Trans Am Series presented by Pirelli will hold another race tomorrow, Sunday, June 4, as the Chevrolet Detroit Grand Prix presented by Lear continues with the TA2 class holding the 3-Dimensional Services Muscle Car Challenge at 11:45 AM ET, a 70-minute competition.